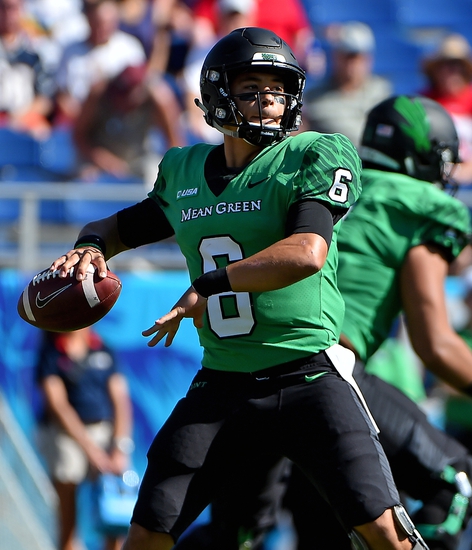 The SMU Mustangs will travel to Apogee stadium to take on the North Texas Mean Green this upcoming Saturday in College Football Action.

The SMU Mustangs finished last season with an overall record of 7-6 (4-4 AAC) and although they did appear in a bowl game, it was a disappointing end to their season as they lost to the Louisiana Tech Bulldogs, 50-10, in the Frisco Bowl. SMU was led by their offense last season as the Mustangs averaged 37.8 ppg (ranked 12th nationally) on 478.5 total yards per game (294.1 passing yds/g; 184.4 yds/g). SMU will be returning 7 starters on the offensive end, including QB Ben Hicks who completed 58.5% of his passes for 33 TD’s and 12 INT while averaging 274.5 passing yds/game. Hicks won’t have his top two receivers from last year’s team back, however still has a familiar face in WR James Proche who had 6 TD’s last season while average 3.1 rec/g and 62.8 yds/g. SMU should be solid out of the backfield as they return both Xavier Jones (82.7 yds/g; 9 TD) and Ke’Mon Freeman (41.8 yds/g; 11 TD). For SMU to get back to a bowl game, they’ll need to find some answers on the defense end as the Mustangs allowed their opponents to average 36.7 ppg on 476.7 total yards per game (207.7 rushing yds/g; 269.0 passing yds/g). The Mustangs will need to improve the tendency to give up big plays and will be hoping that LB Kyran Mitchell can lead a defense that is returning 7 starters.

The North Texas Mean Green (9-5; 7-1 C-USA) won their last 5 regular season games to win the C-USA West Division which was a major accomplishment, however, didn’t have the end of the season they envisioned as they fell to FAU Owls by a 41-17 margin in the C-USA Championship game and lost by a 50-30 margin to the Troy Trojans in the New Orleans Bowl. North Texas is set up to have another successful season as their offense that ranked 35.5 ppg on 431.4 total yards per game (228.9 passing yds/g; 202.5 rushing yds/g) is returning 9 starters. Offensively, North Texas will be led by QB Mason Fine who completed 63.4% of his passes for 31 TD & 15 INT while averaging 289.4 yds/g. Fine will have his top two receivers back in Michael Lawrence (4.4 rec/g; 58.5 yds/g; 4 TD) and Jalen Guyton (3.8 rec/g; 59.6 yds/g; 9 TD). North Texas no longer will have Jeffery Wilson in the backfield and will hope that Nic Smith (9.9 att/g; 48.9 yds/g; 6 TD) can take on a bigger role this season. Defensively, North Texas struggled last season as they are allowing their opponents to average 35.0 ppg on 431.4 total yards per game (228.9 passing yds/g; 202.5 rushing yds/g). The Mean Green will be returning 8 starters on the defensive end led by seniors Roderick Young (DL) and LB E.J. Ejiya (LB).

SMU was able to defeat North Texas at home early last season by a 54-32 margin and I’m expecting as both they offenses should be able to put up similar numbers that we saw last year, I’m expecting this to be another high-scoring back and forth contest. SMU struggled a bit on the road last season (1-4) and as I’m not sold that the Mustangs will be able to slow down the passing attack of the Mean Green, I think North Texas will cover this small spread and that this game will hit the over. Good Luck!