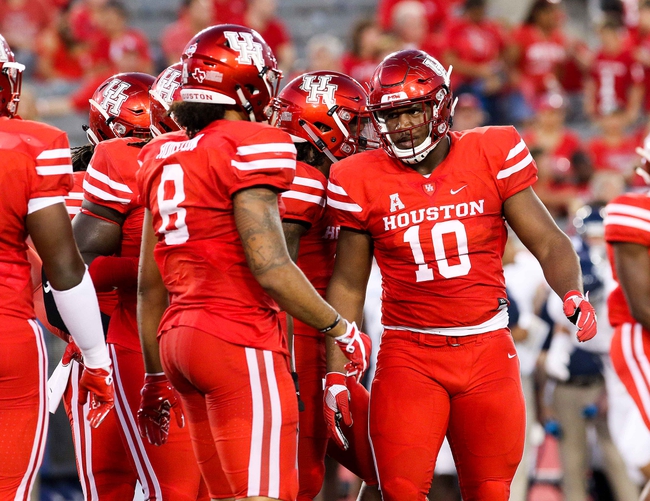 The Houston Cougars will travel to Rice Stadium to take on the Rice Owls this upcoming Saturday in College Football action.

The Houston Cougars finished last season with an overall record of 7-5 (5-3 AAC) and although they finished the regular season strong, winning three of their last four games, they couldn’t pull off a victory in Hawaii Bowl after falling to the Fresno State Bulldogs, 33-27. Offensively, Houston averaged 28.3 ppg on 428.2 total yards per game (166.8 rushing yds/g; 2613 passing yds/g). Houston is excited with QB D’Eriq King under center for an entire season as the junior played well at the end of the season completing 64.7% of his passes with 7 TD & 2 INT while averaging 126.0 passing yds/g. King is a mobile QB as he actually led Houston in receiving last season prior and rushed for 8 TD’s. Houston will be thin at the receiver position and will hope that Courtney Lark (1.9 rec/g; 33.6 yds/g; 2 TD) and Keith Corbin (0.8 rec/g; 13.7 yds/g) can take on bigger roles this season. Leading the way for the Cougars backfield will be Mulbah Car who had 3 TD’s last season while averaging 38.8 rushing yds/g. Defensively, Houston allowed their opponents to average just 23.8 ppg on 422.2 total yards per game (147.9 rushing yds/g; 274.3 passing yds/g). Houston will be returning just 5 starts on the defensive end, however, have arguably the best defensive player in all of College Football in DT Ed Oliver who will be playing on Sundays in the near future.

The Rice Owls opened their 2018 season with a hard fought 31-28 victory of the FCS Prairie View Panthers this past Saturday. Rice jumped out to an early 13-0 lead, however, needed 12 unanswered points in the 4th quarter, including a 23 yard FG by Jack Fox, to avoid the upset loss. Offensively, Rice outgained Prairie View by a 397-384 margin while also winning the turnover battle by a 1-0 margin. Leading the way for the Owls was Emmanuel Esukpa who had 173 yards and a TD on 32 carries. Rice struggled last season as they finished with just a 1-11 (1-7 C-USA) record and it looks as if it’s going to be another long season for the Owls based off their lackluster performance agianst an average FCS team. Rice averaged just 16.3 ppg last season on 331.8 total yards per game and although they found some success on the ground, it’s concerning that the quarterback tandem of Jackson Tyner and Shawn Stankavage combined to go 12 for 24 for just 87 yards. Defensively, Rice allowed their opponents to average 35.8 ppg last season on 425.8 total yards per game (192.6 rushing yds/g; 233.3 passing yds/g). The Owls are returning 5 starters on the defensive end and will be led by defensive lineman Roe Wilkins and Zach Abercrumbia.

Houston will look to improve their offensive numbers that we’re a bit down last season, however, an opening season matchup for Rice should give the Cougars plenty of confidence, especially after the Owls just gave up almost 400 yards of offense to an at best average FCS team. Rice’s offense should have a bunch of problems with the Houston defense and as I think Ed Oliver will help neutralize Rice’s Emmanuel Esukpa, I’m taking Houston to cover this large road spread.