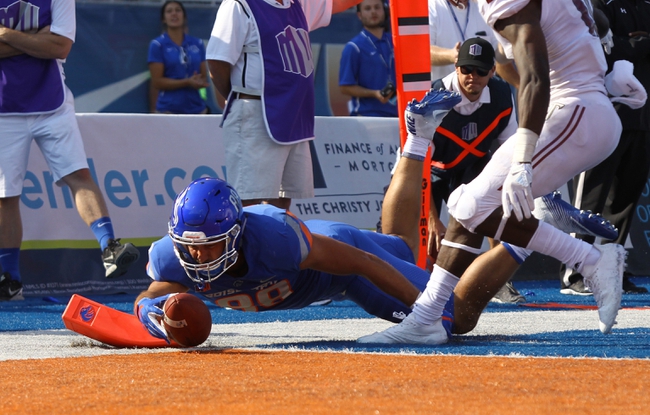 The Broncos are fresh off a nice season in 2017, finishing at 11-3 and 7-1 in Mountain West play. That meant first place in the Mountain Division, and after a victory over West champs Fresno State in the Mountain West Championship game, Boise State proceeded to the Las Vegas Bowl where they took out Oregon.

Brett Rypien steps back into the starting QB role for the Broncos this season following 2877 pass yards with 16 TDs and six picks. Backing up Rypien in the lead RB slot is Alexander Mattison, who put up 1086 yards and 12 touchdowns last season.

Troy bagged a nice season in 2017 as well, finishing at 11-2 and 7-1 in Sun Belt play. That left the Trojans in a tie for the Sun Belt Championship, and afterward they took out North Texas in the New Orleans Bowl.

Kaleb Barker will be taking over the starting duties for the Trojans this season, and in limited action last year he tossed for 143 yards and one touchdowns. We’ll also get a big dose of new lead RB Jamarius Henderson this season. In 2017, Henderson rushed 45 times for 355 yards and four scores, carrying a nice 7.9-yard average.

These two teams met in the opener last season, and even though the game was a bit sloppy here and there, the Broncos managed to power out a 24-13 win. Boise State is charging into this season with a ton of high expectations, and considering the relatively minimal turnover on the key players, I think those expectations are warranted. Troy is not going to go down easily of course, but with the new faces in the QB and RB spots it may take them a few games to get things moving. I think the line here looks pretty darn good so I’m taking the Broncos.