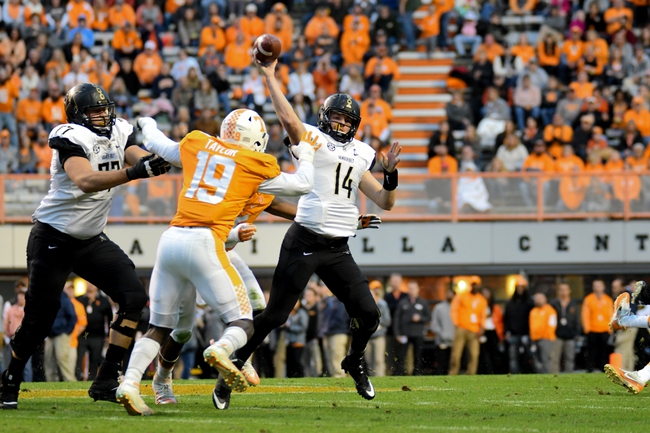 We have some opening week college football action from Vanderbilt Stadium in Nashville, Tennessee as the Middle Tennessee State Blue Raiders take on the Vanderbilt Commodores.

The Middle Tennessee State Blue Raiders will look to build on a decent 2017 campaign that saw MTSU finish with a 6-6 record, including a 4-4 mark in C-USA play to finish in a 3-way tie for 3rd in the C-USA East division, giving the Blue Raiders a berth in the Camellia Bowl where Middle Tennessee defeated Arkansas State by a final score of 35-30. Brent Stockstill is back under center for the Blue Raiders after being injured for part of last season, but still threw for 1,672 yards, 16 touchdowns and 8 picks on 57.7% passing last season. Ty Lee is back to lead the receiving corps after far and away leading the Blue Raiders in receiving with 79 catches for 955 yards and 5 TDs last season. Defensively, the Blue Raiders boasted one of C-USA’s best defensive units after allowing 357 yards and 25 points per game last season with a solid pass rush and the best part for Middle Tennessee is that eight of the 11 starters are back for this season. The key to MTSU’s success this season is can the team stay healthy because the parts are all there on both sides of the ball to do some serious damage this season.

The Vanderbilt Commodores will look to bounce back after a frustrating 2017 campaign that saw the ‘Dores finish 5-7 with a 1-7 record in SEC play, finishing only ahead of Tennessee who didn’t win a single conference game last season in the SEC East division. Kyle Shurmur leads the Commodores under center once again after leading a Vanderbilt offense that put up 24.6 points and 351 yards per game last season. The problem is that the Commodores have to replace Ralph Webb after Webb moved on to the NFL leaving a Vandy offense that racked up just under 1,300 yards and 14 touchdowns on the ground last season. The ‘Dores will rely on Illinois transfer Ke’Shawn Vaughn to be the physical back in the Vandy backfield. Defensively, the Commodores will have to be better after allowing 34 points per game in seven of their last ten games to finish the 2017 campaign, each of those seven games Vanderbilt lost by the way. Vanderbilt lost 8 of their top 13 tacklers from last season, but Jordan Grifin is back in the linebacking corps after finishing 3rd with 62 total tackles last season, including 8.5 tackles for a loss. Only time will tell if this is the time for Vanderbilt to shine or if the Commodores will revert back to old habits a la 2017.

Historically, Middle Tennessee has regressed in this matchup, most recently losing 28-6 in last year’s matchup, which initially had me leaning towards Vanderbilt at home. However, while Shurmur has plenty of experience under center for the Commodores, the fact is that Vanderbilt still has a ton of question marks and holes to fill after losing quite a few starters from last season. Middle Tennessee had a ton of success down the stretch with Stockstill back under center, and I think this is the Blue Raiders’ best chance in a while to pull off the upset against their in-state rivals so I’ll take the points with Middle Tennessee in a game the Blue Raiders have a very good shot at winning outright.