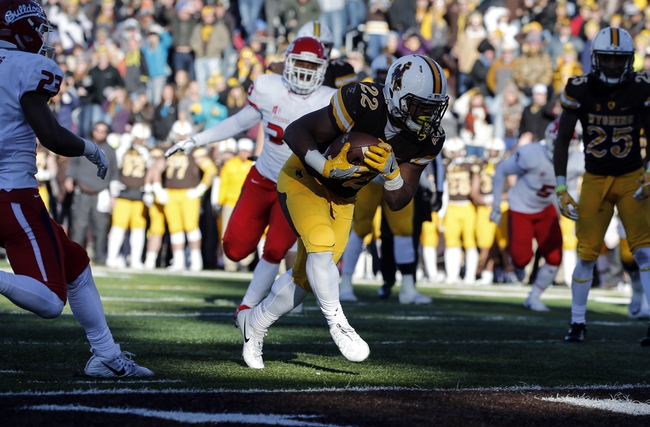 The Washington State Cougars will travel to War Memorial Stadium (WY) to take on the Wyoming Cowboys this upcoming Saturday in College Football action.

The Washington State Cougars had a solid season last year, finishing their season with a 9-4 (6-3 Pac-12) record, however, they couldn’t finish the season how they wanted to as they loss to the Michigan State Spartans, 42-17, in the Holiday Bowl. Offensively, Washington State and their passing attack averaged 30.3 points per game (68.0 rushing yds/g; 366.8 passing yds/g). Washington State will no longer have their record setting QB Luke Falk and there is big question mark at the QB position going into the season which looks as of now, will be Gardner Minshew who completed 57.0% of his passes for 16 TD and 7 INT for East Carolina last season. Minshew’s top targets will be Tavares Martin Jr. (6.4 rec/g; 75.5 yds/g; 9 TD), Renard Bell (3.1 rec/g; 41.4 yds/g; 3 TD), and Kyle Street (4.5 rec/g; 41.0 yds/g; 3 TD). The backfield will be led by James Williams who averaged 30.4 yds/g last season to go along with a TD. Defensively, Washington State has improved tremendously over the past few seasons and finished last season holding their opponents to just 25.8 ppg  on 323.3 total yards per game (152.4 rushing yds/g; 170.9 passing yds/g). The Cougars will be returning 7 starters on the defensive end, led by LB Peyton Pelluer and S Jalen Thompson.

The Wyoming Cowboys opened their season last Saturday with a victory as they defeated the New Mexico State Aggies by a 29-7 margin. Wyoming’s defense was outstanding in the victory as the Cowboys had little trouble securing the victory after taking a 22-0 lead midway through the 3rd quarter. The Cowboys offense was led by running back Nico Evans who had 190 yards and two TD’s on 24 carries. Wyoming’s defense was really tough on the Aggies as they held the Aggies to just 135 total yards which included an incredible -9 rushing yards. The Wyoming Cowboys finished last year with an 8-5 (5-3 MW) overall record and although they lost their last two conference games, including an embarrassing loss to San Jose State, the Cowboys did finish their season on a high note, defeating the Central Michigan Chippewas by a 37-14 margin in the Famous Idaho Potato Bowl. Wyoming, even with their star QB Josh Allen, had trouble generating a lot of offense last season as the Cowboys finished the season averaging just 23.5 ppg on 286.0 total yards per game (108.8 rushing yds/g; 177.2 passing yds/g). The loss of Josh Allen will hurt, and the Cowboys will hope that hope that red-shirt Tyler Vander Waal who completed 13 of 22 passes for 147 yards in the season opener. Austin Conway, who led the team in receiving last year is back for the Cowboys and they also got solid games from Austin Fort (2 rec, 51 yards) and Tyree Mayfield (4 rec; 39 yards). Defensively, Wyoming returned 7 starters from a team that held its opponents to just 17.5 ppg last season on 335.2 total yards per game (160.3 rushing yds/g; 174.9 passing yds/g).

Washington State had a great season last year however, it’s going to be hard to for the Cougars to not take a step back this season with Luke Falk no longer under center. Wyoming’s offense is going to struggle at times this season, however, they have to be encouraged by the performance they got from Nico Evans and the Cowboys should be competitive as they have a defense that can give opponents a bunch of trouble. It’s going to be interesting to see how the Mike Leach offense plays this season, especially against a strong defense in a tough road environment and as I think this will be a low scoring battle, I’m taking the home team and the points in this one. Good Luck!