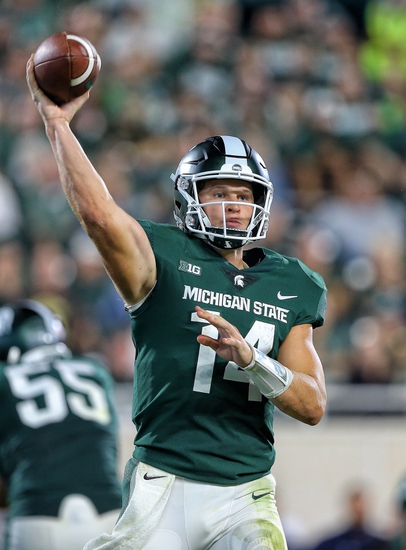 The 11th ranked Michigan State Spartans barley avoided a major upset to start of their season and they barley escaped with a 38-31 victory this past Saturday. In a tight back and forth game, Michigan trailed by a 31-30 margin after a Utah State TD with just over five minutes remaining, however, answered with a 9 play, 75-yard TD drive and secured the victory after intercepting Utah State’s Jordan Love with two minutes remaining in regulation. Michigan State outgained Utah State by a 452.344 margin and was outstanding against the rush as they held the Aggies to just 25 rushing yards on 25 total carries. Leading the way for the Spartans was QB Brian Lewerke who completed 23 of 33 passes with 287 yards, 2 TD, and an INT. Lewerke did a nice job spreading the ball around to his receivers who were led by Cody White (5 rec; 70 yards; TD), Felton Davis III (3 rec; 69 yards; TD), and Darrell Stewart Jr. (7 rec; 55 yards). The Spartans rushing attack was led by LJ Scott who had 84 yards on 23 carries. Michigan State had a successful season last year, posting a 10-3 overall record, however, will hope they can produce more offense this season as they averaged just 24.5 ppg on 383.1 total yards per game (167.8 rushing yds/g; 215.2 passing yds/g). Defensively, Michigan State returns 9 starters from a defense that held its opponents to an average of 20.0 ppg on 297.6 total yards per game (95.3 rushing yds/g; 202.3 passing yds/g).

The Arizona State Sun Devils and the Herm Edwards era got off to a great start to their 2018 season as they easily defeated the UT-San Antonio Roadrunners, 49-7, this past Saturday night. Arizona State dominated on both sides of the ball throughout the game and had no trouble securing the victory after taking a 28-0 lead at halftime. Arizona State outgained UT-San Antonio by a 503-221 margin and won the turnover battle by a 3-0 margin. Leading the way for the Arizona State offense was QB Manny Wilkins who completed 16 of 24 passes for 237 yards and 4 TD. WR N’Keal Harry had a monster game for the Sun Devils as he had 140 receiving yards and 2 TD’s on 6 receptions. Leading the way for the Sun Devils backfield was Eno Benjamin (16 att; 131 yards; TD) and Isaiah Floyd (9 att; 79 yards; TD). Arizona State returned 7 starters from an offense that averaged 31.8 ppg on 431.2 total yards per game (175.5 rushing yds/g; 255.7 passing yds/g). Defensively, Arizona State is currently rebuilding and has installed a 3-3-5 scheme to hopefully help improve a defense that allowed 32.8 ppg on 449.7 total yards per game (174.8 rushing yds/g; 274.9 passing yds/g).

Michigan State had a surprisingly tough time as 23.5 point favorite at home against Utah State however, it’s important that we don’t think less of a Spartans team that had double-digit wins last season and returned 19 total starters. Arizona State had an impressive performance in Herm Edwards debut however, this is still a team that has just a few impact players on the offensive end is really working on installing a new defense under first year DC Danny Gonzales. Arizona State picked up a few huge wins at home last season, especially against Washington, however, the Sun Devils are going to have a lot harder time keeping Michigan State off the scoreboard in this one and as I think the line is a bit low based of the performances of each team last week, I think Michigan State is the play in this one.