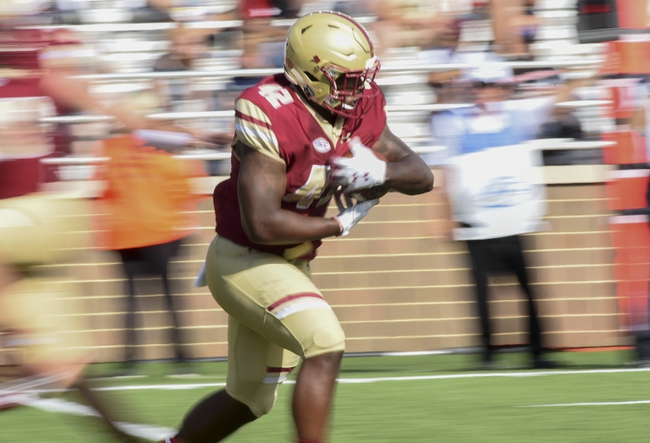 The Holy Cross Crusaders and the Boston College Eagles will be matching up in college football action at BC Alumni Stadium on Saturday, September 8.

The Crusaders enter this game at 0-1 on the young season following a 24-17 loss to Colgate in their first game. Holy Cross was down 24-0 at halftime, but in the final two quarters they went on a 17-0 run to make the scoreboard look a little better cosmetically.

Emmett Clifford had an up-and-down outing at QB for Holy Cross in their first game, going 14-of-23 for 113 yards, one TD and one pick. Leading the way on the ground for the Crusaders was Miles Alexander, with 17 carries for 95 yards.

Over on the Boston College side, they bagged an opening-week win versus the UMass Minutemen 55-21. The Eagles slammed out 48 points in the first half and held UMass to just seven points over the first three quarters.

Anthony Brown came out firing for the Eagles in their Week 1 win, going 15-of-21 for 279 yards and four TDs. On the ground, AJ Dillon led the way for Boston College, rushing 20 times for 98 yards on the day.

Holy Cross stumbled out of the gate in their first outing, but it was a good sign to see them find their proverbial stride. The Crusaders’ running game looked pretty good for the most part, and I expect them to rely on it heavily here. As for BC, they barely broke a sweat in their runaway opening victory and still cruised. I’m going to stick with the Eagles here.