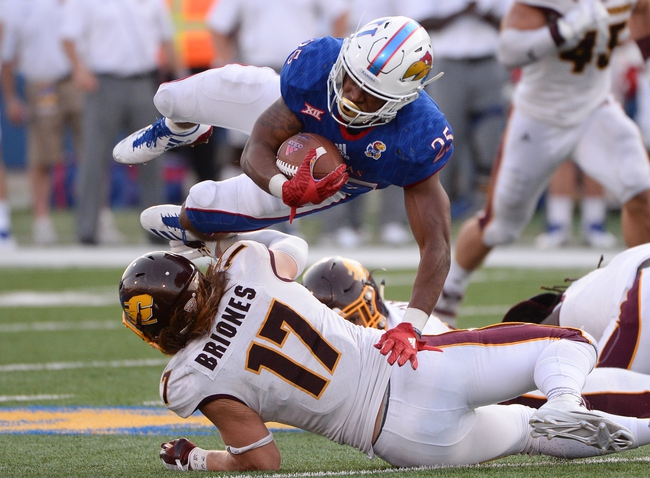 The Kansas Jayhawks will be looking for their first win in week two following a 26-23, overtime loss to Nicholls State as a nine point home favorite. Kansas held Nicholls State to 329 yards but only managed 255 yards with no production on the ground.

Jayhawks quarterback Peyton Bender completed 19-35 for 187 yards with a pair of touchdowns and zero picks. Kerr Johnson topped the KU receiving corps with 54 yards on three receptions including a 15 yard TD while Khalil Herbert and Dom Williams combined for 96 rushing yards on 18 carries.

The Central Michigan Chippewas had too many issues on both sides of the football in a 35-20 defeat at Kentucky as a 17 point road dog on opening day. Central Michigan trailed 427-255 in yards despite winning the turnover battle 4-0. Chippewas quarterback Tony Poljan threw for 137 yards on17-27 with no touchdowns of interceptions.

Poljan was also the top Central Michigan runner with 47 yards on 16 carries. Cameron Cole topped the Chippewas receiving corps with four receptions for 51 yards as the offense struggled to stretch the field. The Chips defense contributed to the scoring with a 20 yard fumble recovery for six but the offensive side of the football couldn’t move the chains.

This isn’t going to be the most watched game in week two but I thnk points at a premium so something on the under...