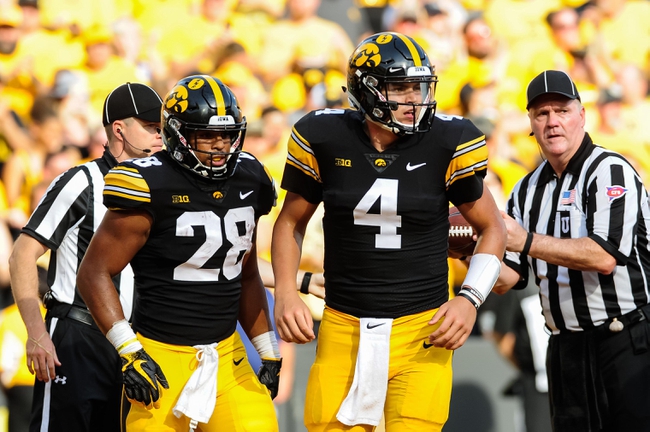 The Iowa State Cyclones will make this their season opener after the game against South Dakota Sate was cancelled due to poor weather. The Iowa State Cyclones have won six of their last eight road games. Iowa State should be fine offensively with quarterback Kyle Kempt being given a sixth year and a 1,000-yard rusher in David Montgomery back at running back. Throw in massive wide receivers in Matt Eaton and Hakeem Butler, and the Cyclones should be able to keep up in the explosive Big 12. Defensively, Iowa State returns six starters from one of the more improved units in college football. Ray Lima is one of the top defensive lineman you’ve never heard of and JaQuan Bailey is one of the best pass rushers in the Big 12. ISU also has an experienced secondary and a sure tackler in linebacker Marcel Spears. The Iowa State Cyclones have what it takes to be a top-25 team this season.

The Iowa Hawkeyes look for a quick 2-0 start to the season after beating Northern Illinois, 33-7. The Iowa Hawkeyes have won four of their last five home games. Nate Stanley is completing 47.8 percent of his passes for 108 yards, one touchdown and one interception. Stanley has one or less touchdown passes in six of his last eight games. T.J. Hockenson and Nate Wieting have combined for 94 receiving yards on five receptions while Ihmir Smith-Marsette has three receptions. The Iowa Hawkeyes ground game is averaging 209 yards per contest, and Toren Young leads the way with 84 yards and one touchdown. Defensively, Iowa is allowing seven points and 211 yards per game. Kristian Welch leads the Iowa Hawkeyes with 11 tackles, Parker Hesse has two sacks and Amani Hooker has one interception.

I don't like the fact that the Iowa State Cyclones didn't get a warm up game to kind of get the juices flowing and knock off any rust from such a long offseason. The Iowa Hawkeyes looked sharp in their season opener, as they were solid defensively and are still the same Iowa squad capable of doing damage in the trenches. And while Iowa has owned this rivarly over the years, Iowa State has the ability to be really good this season and is even a sleeper in the Big 12. With experience on both sides of the ball, a proven quarterback and a defense that no longer stikns, the Cyclones are ready to stop being Iowa's little brother. This may be a case of getting free points with the better team. So, even with the game in Iowa City, I'm taking the Cyclones and the points.