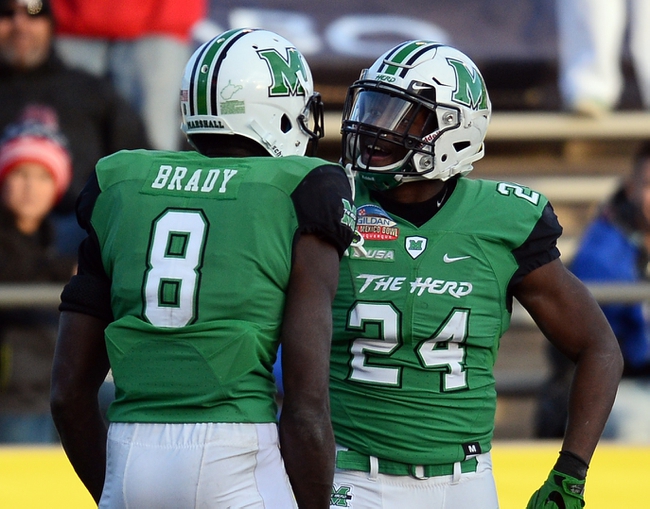 The Eastern Kentucky Colonels will travel to Joan C. Edwards Stadium to take on the Marshall Thundering Herd this upcoming Saturday in College Football action.

The Eastern Kentucky Colonels started off their season with a solid 49-23 victory over the Morehead State Eagles this past Thursday. Eastern Kentucky jumped all over Morehead State early in this one, taking a 18-0 lead at the end of the 1st quarter, and had no trouble securing the victory after a taking a 32-7 lead with 4:22 left in the 3rd quarter. Eastern Kentucky outgained Morehead State by a 564 – 332 margin and absolutely dominated on the ground, rushing for an incredible 404 yards. Leading the way for the Colonels rushing attack was Daryl McCleskey (14 att; 125 yards), LJ Scott (14 att; 86 yards; 2 TD), and Jason Lewis (10 att; 71 yards). QB Dakota Allen completed 9 of 14 passes for 93 yards and a TD while Dan Paul hauled in 2 TD’s on both his receptions for the Colonels. Eastern Kentucky is looking to get their program back to their winning ways as the Colonels comes into this season coming off rare back-to-back losing seasons after finishing last season with a 4-7 (3-5 OVC) record. Offensively, it was a struggle last season for the Colonels as they averaged just 20.7 ppg on 319.8 total yards per game (103.7 rushing yds/g; 126.1 passing yds/g). Defensively, Eastern Kentucky returned 7 starters from a team that held its opponents to an average of 26.5 ppg on 343.9 total yards per game (148.5 rushing yds/g; 195.5 passing yds/g). Eastern Kentucky is thrilled to have DL Aaron Patrick back after missing last season due to injury and have to be happy to see he picked up where he left off in 2016 as he recorded 2.5 sacks against Morehead State.

The Marshall Thundering Herd opened up their season with a 35-28 victory over the Miami (OH) RedHawks this past Saturday. Marshall went into halftime with a 21-7 lead however, needed the defense to step up late in the game after a Miami (OH) had the ball back with over three minutes left to play, trailing by just a TD. Marshall was outgained by Miami (OH) by a 446-443 margin however, did a great job defended the run as the RedHawks finished the game with just 89 rushing yards. Leading the way for the Thundering Herd offense was Isaiah Green who completed 24 of 37 passes for 2 TD. Tyre Brady was unstoppable at the receiver position for Marshall as he had 116 yards and 2 TD’s on 9 receptions. Obi Obialo also had a solid game, racking of 47 receiving yards on 6 receptions. Leading the Thundering Herd backfield was Keion Davis who had 76 rushing yards and a TD on 17 carries. Marshall is coming off an 8-5 season (4-4 C-USA)and although they lost 4 of their last 5 regular season games, they did defeat Colorado State in the New Mexico Bowl by a 31-28 margin. Offensively, Marshall averaged 26.7 ppg last season on 379.8 total yards per game (140.2 rushing yds/g; 239.6 passing yds/g) however, are optimistic that they can improve on those numbers as they have 8 returning starters. Defensively, Marshall should be strong again this season as they return 9 starters from a team that held their opponents to an average of 19.9 ppg last season on 341.7 total yards per game (121.2 rushing yds/g; 220.5 passing yds/g).

Eastern Kentucky has to be thrilled with their rushing performance in their season opener, but we shouldn’t read into it too much as this still is a team that is expected to be nothing by a .500 club in the FCS Ohio Valley Conference. Marshall is an experienced team that should once again be led by their defense and certainly can challenge for a C-USA Championship this season if they can enough production from the offense. Marshall ranked 19th in the country in rushing defense last season so I don’t image them having too much of an issue for stopping the Colonels rushing attack and although I think the number will be high when/if this game gets lined, I’m initially leaning on taking Thundering Herd at home in this one.