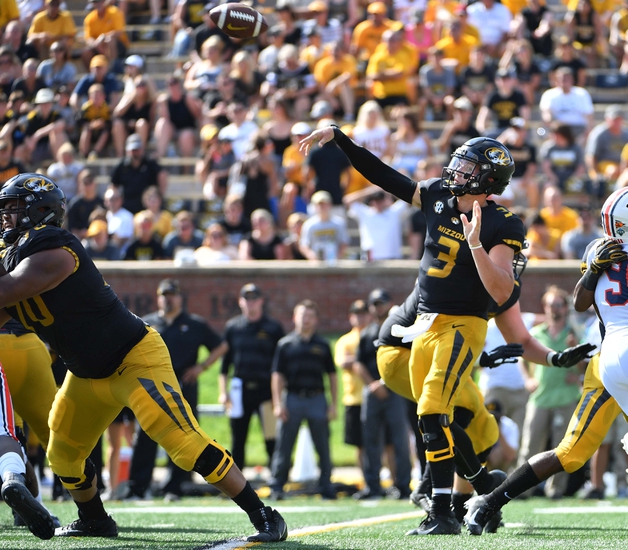 The Wyoming Cowboys and the Missouri Tigers meet in college football action from the Memorial Stadium at Faurot Field in Columbia, Missouri on Saturday.

The Wyoming Cowboys will look to rebound from their first loss of the season in a 41-19 defeat at the hands of Washington State in their last outing. Tyler Vander Waal threw for 67 yards on 8 of 20 passing with an interception, while Nico Evans led the Cowboys in rushing with 18 carries for 89 yards and a touchdown before leaving the game due to injury. Avante’ Cox added a rushing touchdown of his own, while James Price led Wyoming with 23 receiving yards and Austin Conway added a team-leading 3 grabs in the loss. Antonio Hall logged an interception and Garrett Call recovered a fumble while Logan Wilson led all Cowboys with 7 tackles in the losing effort.

The Missouri Tigers will look to build on a strong showing in their regular season opener, taking down UT-Martin by a final score of 51-14. Drew Lock threw for 289 yards and 4 touchdowns on 19 of 25 passing, while Larry Rountree led the Tigers in rushing with 58 yards and a touchdown on 14 carries. Damarea Crockett added a rushing score of his own for Mizzou, while Emanuel Hall led the Tigers with 4 catches for 171 yards and a pair of receiving scores. Cam Scott and Johnathon Johnson each added a touchdown grab as well in the win. Defensively, Mizzou combined for a pair of sacks while Cale Garrett led the Tigers with 6 tackles as Missouri held UT-Martin to just 277 yards of total offense in the game.

I got burned by Wyoming against Washington State as I thought the tough style of play that we saw from Wyoming against New Mexico State would carry over to the next game as the Cougars struggled against teams with that physical style. However, that didn’t happen as planned, while Missouri on the other hand, routed UT-Martin as I had expected. Wyoming is a definite step up from UT-Martin, but I have Drew Lock as my front runner for the heisman this season and I think Lock takes another step in that direction with another dominant performance here, so I’ll lay the points with Missouri.