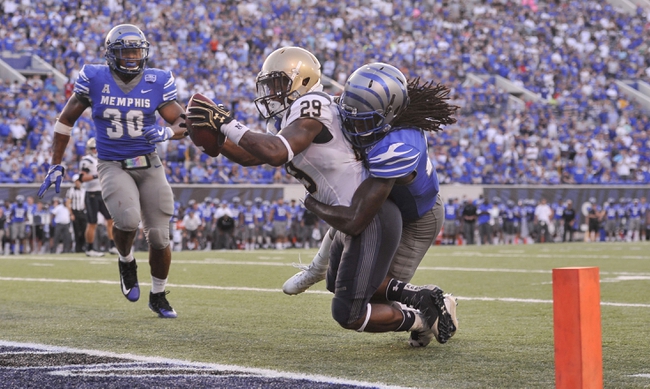 The Memphis Tigers look for a 2-0 start for the fourth straight season after waxing the Mercer Bears, 66-14. The Memphis Tigers have won five of their last seven road games. Brady White is completing 78.6 percent of his passes for 358 yards, five touchdowns and zero interceptions. White has seven touchdown passes in 77 career pass attempts. Damonte Coxie and Patrick Taylor Jr. have combined for 154 receiving yards and two touchdowns while Antonio Gibson has three receptions. The Memphis Tigers ground game is averaging 324 yards per contest, and Calvin Austin III leads the way with 83 yards and one touchdown. Defensively, Memphis is allowing 14 points and 174 yards per game. JJ Russell leads the Memphis Tigers with four tackles, Jacoby Hill has one sack and T.J. Carter has one interception.

The Navy Midshipmen hope to avoid their first 0-2 start since 2012 after losing their opener to Hawaii, 41-59. The Navy Midshipmen have won five of their last six home games. Garret Lewis is completing 55.6 percent of his passes for 66 yards, zero touchdowns and zero interceptions. Lewis and Malcolm Perry have combined for one touchdown pass and zero interceptions. Taylor Jackson and CJ Williams have combined for 66 receiving yards on five receptions while Trey Walker has one reception. The Navy Midshipmen ground game is averaging 326 yards per contest, and Perry leads the way with 108 yards and one touchdown. Defensively, Navy is allowing 59 points and 522 yards per game. Elan Nash leads the Navy Midshipmen with eight tackles, Nizaire Cromartie has one sack and Sean Williams has one pass deflection.

The Memphis Tigers are clearly still an explosive offensive team, but I still have questions about their defense and holding Mercer to 14 points doesn't answer any. The Navy Midshipmen obviously have issues of their own, but they're led by one of the best coaches in the game and things should improve sooner than later. The bottom line is Navy is a money making machine as an underdog and preparing for this triple-option isn't easy. Memphis did beat Navy last year by three points, but the Midshipmen had their way offensivley and that game was on the road. The Navy Midshipmen are 12-5-1 ATS in their last 18 games as an underdog. When you throw in the hook with the free field goal, I have a hard time passing up Navy, even if last week was ugly.