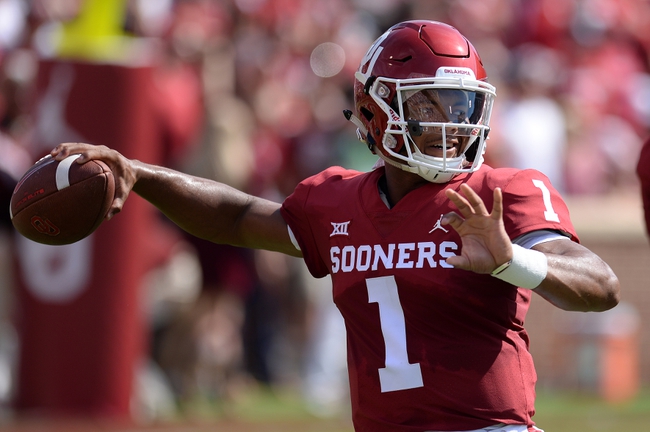 The UCLA Bruins will travel to Memorial Stadium (Norman, OK) to take on the 7th ranked Oklahoma Sooners this upcoming Saturday afternoon in College Football action.

It was a disappointing start to the Chip Kelley era at UCLA as the Bruins were upset by the Cincinnati Bearcats, 26-17, this past Saturday. It was a solid start for the Bruins as they raced to an early 10-0 lead in the 1st quarter, however, the offense struggled after losing QB Wilton Speight (8 for 12; 45 yards; INT) due to a back injury and allowed the Bearcats to seal the victory with a TD with just 1:44 left in regulation. UCLA gained just 306 yards on the offensive end and lost the turnover battle by a 2-1 margin. The Bruins also had some questionable coaching calls as many people will be questioning why the Bruins went for it on 4th & 1 on their own 36 yard line, while training just by a 19-17 margin with 5:46 left in regulation. Leading the way for the Bruins was RB Kazmeir Allen who had 103 rushing yards and a TD on 5 carries. Freshman QB Dorian Thompson-Robinson finished the game completing 15 of 25 passes for 117 yards however, we expected more action on the ground from the duel-threat running back as he finished with -4 yards on 8 carries. WR Theo Howard, the top returning receiver for the Bruins, lead UCLA with 5 receptions for 52 yards. Defensively, UCLA allowed 36.6 ppg last season on 483.7 total yards per game (287.4 rushing yds/g; 196.3 passing yds/g) and although they played well yesterday, Cincinnati is probably going to be the worst offense this team faces all season.

Oklahoma started the post Baker Mayfield era with a bang as the 7th ranked Sooners had one of the more impressive performances this past Saturday in their 63-14 victory against the FAU Owls. Oklahoma jumped all over the Owls early in this one and had no trouble securing victory after taking a 28-0 lead by the end of the 1st quarter. Oklahoma outgained FAU by a 650-324 margin and didn’t commit any turnovers in the victory. Leading the way for the offense was QB Kyler Murray who completed 9 of 11 passes for 209 yards and 2 TD’s. RB’s Rodney Anderson (5 carries; 100 rushing yds; 2 TD) and Trey Sermon (9 carries; 69 rushing yards; 1 TD) led the way for the Sooners backfield. Marquise Brown led the Sooners receivers as he finished with 133 yards and a TD on 6 receptions. As impressive as the offense was for Oklahoma, they have to be thrilled with their defensive performance agianst the talented FAU offense that averaged 40.6 ppg last season. The Sooners defense ranked just 68th nationally last season, allowing their opponents to average 27.1 ppg and really struggled defending the passing attack as they allowed 238.4 passing yards per game. Oklahoma’s defense is a bit young, especially in the secondary, however, there is optimism in Norman right now that their defense is strong enough for the Sooners to be in the CFB playoff picture by the end of the season.

It was a tale of two different stories for UCLA and Oklahoma as the Bruins dropped a disappointing match-up against a rebuilding Cincinnati team while the Sooners looked as if they are once again going to be one of the best teams in College Football with an impressive performance by Kyler Murray. UCLA’s offense looked lost after they lost Wilton Speight, who is still questionable for this match-up, and in my opinion, the rebuilding project that Chip Kelly has on his hands is going to take a bit longer to get together than originally planned. Outside of Murray’s performance, Oklahoma’s defense did a great job slowing down a fast-paced FAU offense and although this game has yet to be lined due to the uncertainty of Speight, it’s going to have to be a major number for me not to go with the Sooners at home in this one.