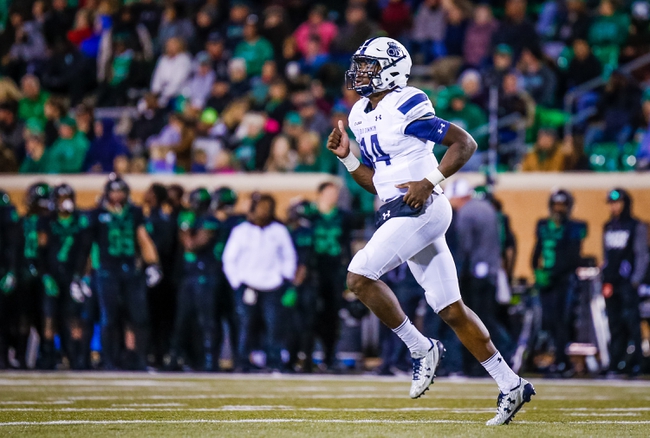 CUSA college football brings us a bout between the Florida International Golden Panthers and the Old Dominion Monarchs.

Golden Panthers quarterback James Morgan completed 11-90 for 90 yards and a touchdown with an interception that turned in to a 33 yard pick six. Christian Alexander was effective in the air for FIU, going 6-8 for 67 yards while Tony Gaiter IV and CJ Worton combined to catch nine balls for 122 yards. Anthony Jones gave the Golden Panthers some punch on the ground with 88 yards on 15 carries and a pair of TD’s but generally the offense didn’t stretch the field.

The Old Dominion Monarchs suffered through a second half meltdown against Liberty in a 52-10 defeat where the team was outscored 38-0 over the final 30 minutes. The Old Dominion defense allowed almost 600 yards while the offense countered with 301 yards and a pair of lost fumbles. Monarchs quarterback Steven Williams was 14-30 for 132 yards and struggled to get the ball downfield.

Williams was the top ODU runner with 43 yards on ten touches and scored the lone touchdown on a one yard run in the second quarter. Jonathan Duhart led the Monarchs receiving corps with 83 yards on seven receptions and was the team’s top offensive threat.

It’s tough to get a handle on these two teams as I thought Old Dominion had the most potential coming in to the season. I’ll back the Monarchs who hopefully show some life here…