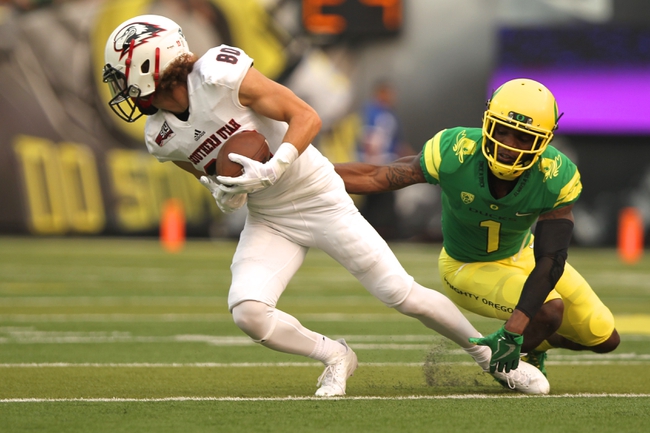 The Southern Utah Thunderbirds will travel Reser Stadium to take on the Oregon State Beavers this Saturday night in College Football action.

The Southern Utah Thunderbirds dropped their 2018 opener last week in a tough battle last week against the North Alabama Lions, 34-30, this past Saturday. Southern Utah held a 16-13 halftime lead however, couldn’t hold on for the victory after North Alabama scored a TD with just :12 seconds remaining in regulation for the victory. Southern Utah was outgained by a 554-532 margin and lost the turnover battle by a 1-0 margin. Leading the way for the Thunderbirds was QB Chris Helbig who completed 28 of 38 passes for 316 yards and 2 TD. Helbig also had some success on the ground, rushing for 38 yards and a TD on 13 attempts. Southern Utah had a monster performance by WR Ty Rutledge who had 161 receiving yards and a TD on 7 receptions. South Utah had 227 yards on the ground and was led by James Felila (16 att; 83 yards; TD) and Terrance Beasley (9 att; 67 yards). Southern Utah had a successful 2017 season, finishing the year with a 9-3 overall record which included a trip to the FCS playoffs, however, the Thunderbirds will have a hard time repeating that level of success as they lost a ton of talent on the defense end and can’t be encouraged, losing to a D-II team in North Alabama who is playing just a partial FCS schedule this season. Offensively, Southern Utah averaged 33.6 ppg on 437.4 total yards per game (174.2 rushing yds/g; 263.2 passing yds/g). Defensively, the Thunderbirds held their opponents to an average of 28.0 ppg on 414.3 total yards per game (145.6 rushing yds/g; 268.8 passing yds/g).

The Oregon State Beavers had a rough start to their 2018 season as they were handed  a 77-31 loss by the hands of the 5th ranked Ohio State Buckeyes last Saturday. Oregon State had a nice bounce TD early to make the game 7-7 early in the 1st quarter, however, the Buckeyes quickly put this game away after 42 unanswered points by the Buckeyes gave Ohio State a 49-14 lead early in the 3rd quarter. Oregon State outgained Ohio State by a 721-392 margin and allowed the Buckeyes to get 35 first downs in the loss. Leading the way for the Beavers was RB Atravis Pierce who had 168 yards and 2 TD on 11 carries. QB Conor Blount who completed 12 of 19 passes for 169 yards and 2 TD’s. Blount’s main target on the day was Trevon Bradford who had 104 receiving yards and 2 TD’s on 6 receptions. Oregon State finished last season with just a 1-11 (0-9 Pac-12) record and it’s going to be a major rebuilding job for the head coach Jonathan Smith. Offensively, the Beavers must be happy they were able to put up a good amount of points against the Buckeyes as last season, Oregon State averaged just 20.7 ppg on 333.8 total yards per game (137.5 rushing yds/g; 196.3 passing yds/g). Defensively, Oregon State ranked just 128th in the nation in scoring defense as they allowed 43.0 ppg on 473.1 total yards per game (235.8 rushing yds/g; 237.3 passing yds/g) and it looks like the defense, which returned just five starters, could be in for another long season after allowing Ohio to rush for 375 yards and pass for 346 yards.

It was a disappointing start for the Southern Utah Thunderbirds as such success last season, however, they still do have some offensive weapons and have to be impressed by QB Chris Helbig who showed he can get it done with both his arms and his legs. Oregon State is going to try to put their 2017 behind them however, it’s going to be hard to expect much from the Beavers this season as it seems that their defense is going to have trouble slowing basically any offense down. I’m interested to see where the number lands on this one, however, I think the FCS Thunderbirds will be able to keep this one with the somewhat large number I’m expecting them to get.