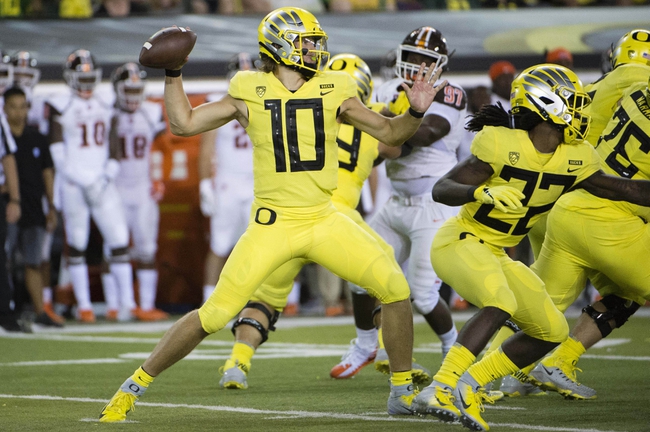 The Portland State Vikings will travel to Autzen Stadium to take on the 24th ranked Oregon Ducks this upcoming Saturday afternoon in College Football action.

The FCS Portland State Vikings had a nice start to their game agianst the Nevada Wolfpack however, things got out of hand quickly for the Vikings in the 2nd half and they went on to get blown out by a 72-19 margin this past Saturday. Portland State scored the first 9 points of the game and was down by just a 30-19 margin at halftime, however, Nevada easily pulled away in the 2nd half after scoring 42 unanswered points. Portland State was outgained by the Nevada by a 636-348 margin and ended the game completing just 3 of 19 attempts on 3rd down. Leading the way for the Vikings was QB Davis Alexander who completed 13 of 32 passes for 224 yards, 2 TD, and an INT. The Vikings didn’t get much going on the ground as they rushed for just 107 yards on 43 carries and was led by RB Darian Green who had 37 rushing yards on 10 carries. WR Charlie Taurnoepeau was a bright spot for the Vikings as he had 130 receiving yards and 2 TD’s on 3 receptions. Portland State didn’t record a win last season (0-11; 0-8 Big Sky) and it’s projected to be another long season for the Vikings. The Vikings have to be encouraged by the play of QB Davis Alexander however, if the Vikings have any chance to register a win this season, they’ll need to improve a defense that allowed opposing offenses to average 43.0 ppg on 493.3 total yards per game (258.7 rushing yds/g; 234.6 passing yds/g).

The Oregon Ducks got off to a surprisingly slow start in their season opener, however, found their offense in the 2nd quarter and went on to easily secure a 58-24 victory over the Bowling Green Falcons this past Saturday. Oregon was down by a 10-0 margin mid-way through the 1st quarter, however, quickly took control of the game after 37 unanswered points gave the Ducks a 37-10 lead with 3:47 left in regulation. Oregon outgained Bowling Green by a 504-389 margin however, did commit 3 turnovers in the victory. Offensively, Oregon was led by QB Justin Herbert who completed 10 of 21 passes for 281 yards, 5 TD’s, and 2 INT. Herbert also contributed 41 rushing yards and a TD on 6 carries. Leading the way for the Ducks backfield was CJ Verdell who had 51 yards on 13 carries. Oregon got a ton of big plays from their receivers and was led by Taj Griffin (1 rec; 83 yards; TD), Jaylon Redd (2 rec, 81 yards, 2 TD), and Johnny Johnson III (1 rec; 40 yards; TD). Defensively, Oregon can’t be thrilled about their performance as although they forced the Falcons into committing three turnovers, they did allow Bowling Green to throw for 253 yards. Oregon returned 7 starters from their defense last season that allowed 29.0 ppg and will be led by LB Troy Dye this season.

Trends will be updated when the line is released.

Portland State is just not a good FCS football team as they went winless last season and there is a solid chance that they won’t pick up one this year either. It was shocking to see the Vikings take an early 9-0 lead, but it’s more concerning that their defense had no answers for the Nevada offensive attack after allowing opponents to average 43.0 ppg. Oregon had more trouble early then I expected agianst a Bowling Green team that is still rebuilding, but we saw how dangerous their offense can be after having 4 passing TD’s of 30+ yards. Oregon’s aggressive defense is going to give Portland State nightmares and it’s not about if Oregon wins, it’s more about how many points will Oregon’s head coach, Mario Cristobal, will allow the Ducks to score. I’m not sure if this one will even be lined, but it’s hard not to take Oregon no matter what the spread is.