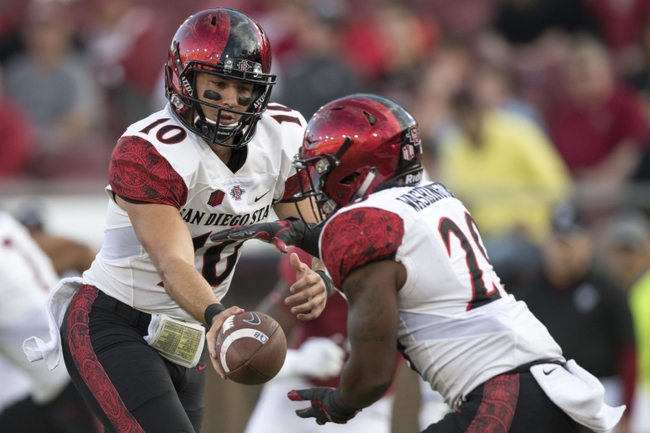 The Sacramento State Hornets and the San Diego State Aztecs will match up in college football action at Qualcomm Stadium on Saturday, September 8.

Sac State enters this game at 1-0 so far, following a 55-7 blowout of the St. Francis Fighting Saints. the Hornets scored 31 points in the first half of that game, then followed it up with 24 more in the second.

Kevin Thomson put up a nice line in the opener for Sacramento State, bagging 224 yards and two touchdowns on 11-of-12 passing. Elijah Dotson and Ja’Narrick James led the rush with four combined touchdowns and 144 yards.

As for San Diego State, they got a tough draw in their first matchup, taking on the Stanford Cardinal. After an early score, the Aztecs lost the lead and couldn’t get much going the rest of the way en route to a 31-10 loss.

Christian Chapman was pretty efficient for the Aztecs in their opener, going 10-of-15 for 113 yards. Leading the rush was Juwan Washington with 24 carries for 158 yards and a TD, while Timothy Wilson caught two passes for 49 yards.

Meanwhile, the Aztecs are 0-4 ATS versus a team with a winning record and the under is 6-0 in their last six games following an ATS loss. The under is 9-1-1 in the Aztecs’ last 11 games after posting less than 275 total yards in their previous game.

This will be a more proper test of Sacramento State’s playing abilities, as their opener was little more than a warm-up. The returns on the Hornets have looked pretty good though. As for San Diego State, they’ve got a couple of positives to take away from the Stanford game, and Washington is their main focus to be happy about. That said, I’m going with Sacramento State here.