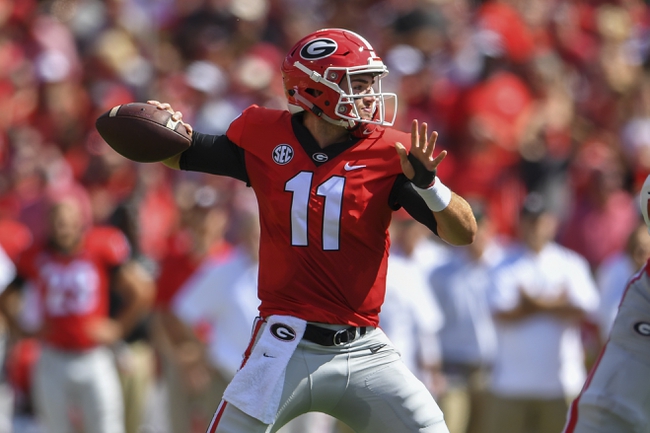 The South Carolina Gamecocks and the Georgia Bulldogs face off on Saturday in a college football week 2 SEC rivalry game.

The Georgia Bulldogs come into this matchup looking to build on a solid start to the year, defeating Austin Peay in a 45-0 rout in their regular season opener last time out. Jake Fromm threw for 157 yards and 2 touchdowns on 12 of 16 passing, while Justin Fields added a 3rd TD pass for the Dawgs in the win. Demetris Robinson’s lone rush led the Bulldogs with 72 rushing yards and a touchdown while James Cook came right behind with 66 rushing yards on 6 carries and D’Andre Swift and Elijah Holyfield each had a rushing score in the win. Mecole Hardman’s 2 receptions gave him a team-high 63 receiving yards and a touchdown, while Riley Ridley and Isaac Nauta each had a touchdown grab and Swift caught a team-high 4 passes in the winning effort. J.R. Reed led the Georgia defense with 4 tackles, while holding Austin Peay to just 152 yards of total offense, 7 first downs and a 2 for 13 mark on 3rd down in the game.

Both sides will see a step up in competition from what they got in week 1, and while points at home with South Carolina is tempting, I can’t go against Georgia here. The Bulldogs were able to show that they still have depth at running back and while the Gamecocks have been a tough out at home, Georgia has dominated ATS on the road, going 9-1 ATS in their last 10 trips on the road and have covered in 7 of their last 9 games laying points on the road. Give me Georgia to win this one by 10-14 points.