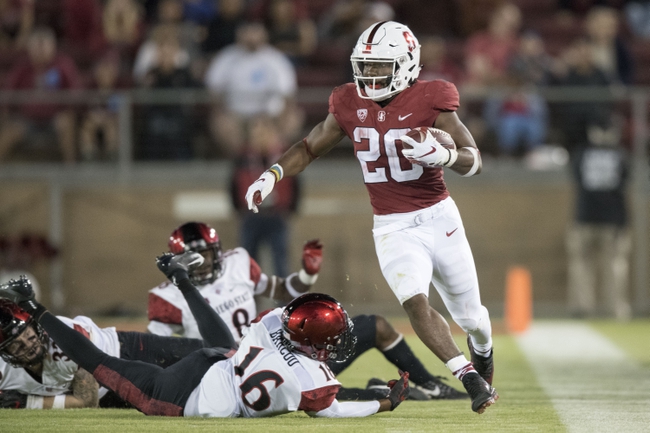 The 15th ranked USC Trojans will travel to Stanford Stadium to take on the 13th ranked Stanford Cardinal this Saturday night in College Football action.

The 15th ranked USC Trojans had all they could handle from the UNLV Rebels last Saturday, however, was able to start their season on a winning note after defeating UNLV by a 43-21 margin. USC led by trailed by a 14-9 margin early in the 4th quarter, however, was able to pull away for the victory after 24 unanswered points gave UCS a 33-14 lead with 12:39 left in the 4th quarter. USC outgained UNLV by a 501-405 margin and committed no turnovers in the victory. Leading the way for the Trojans was QB JT Daniels who completed 22 of 35 passes for 282 passing yards and a TD. Daniels spread the ball around to 8 different receivers, led by Amon-Ra St. Brown (7 rec; 98 yards; TD) and Trevon Sidney (3 rec; 72 yards). Leading the way for the Trojans backfield was Aca’Cedric Ware (10 att; 100 yds; TD), Stephen Carr (9 att; 54 yards), and Vavae Malepeai (8 att; 47 yards; 2 TD). USC averaged 32.6 ppg last season, however, it will be interesting to see where the Trojans end up at the end of the year after losing so much on the offensive end. The good news for the Trojans is that they have to be encouraged by the solid performances of both incoming freshman, QB JT Daniels and WR Amon-Ra St. Brown. Defensively, USC returned 7 starters from a squad that held their opponents to an average of 26.1 ppg on 395.6 total yards per game (158.6 passing yds/g; 237.0 passing yds/g).

The 13th ranked Stanford Cardinal had a tough battle with the talented San Diego State Aztecs, however, was able to avoid a second straight loss to the Aztecs after defeating the San Diego State by a 31-10 margin last Friday. Stanford didn’t score their first offensive points until :27 seconds left in the 2nd quarter, however, was outstanding defensively in the 2nd half and took control of the game after an 80 yard TD pass to JJ Arcega-Whiteside gave Stanford a 24-10 lead with 4:43 left in regulation. Stanford outgained San Diego State by a 382-263 margin and held the Aztecs to just 11 first downs in the victory. RB Bryce Love was held in check by the Aztecs strong rush defense as he had just 29 yards on 18 carries however, San Diego State had no answers for QB K.J. Costello who completed 21 of 31 passes for 332 yards, 4 TD’s and an INT. WR JJ Arcega-Whiteside was the star of the game for the Cardinal as he opened his season with a monster performance, as he had 226 receiving yards and 3 TD’s on 6 receptions. Stanford finished last season with a 9-5 record and looks poised to be one of the best teams in the Pac-12 this season as they return the major pieces of an offense that averaged 32.4 ppg on 388.6 total yards per game (202.4 rushing yds/g; 186.3 passing yds/g). Defensively, Stanford did a nice job avoiding any major damage through the air against the Aztecs and hope that the defense can at repeat their numbers from last season when they held their opponents to just an average of 22.7 ppg on 405.1 total yards per game (169.0 rushing yds/g; 236.1 passing yds/g).

USC defeated Stanford by a 31-28 margin in the Pac-12 Championship game last season, however, this game will have a much different feel to it know that the well-known weapons in Sam Donald and Ronald Jones are no longer with the Trojans. USC has a bunch of young talent and will be a solid squad but it’s concerning their defense just allowed the Rebels to rush for 308 yards, especially when Bryce Love will be in the opposing backfield in this one. Stanford looks like they have a solid QB/WR duo in K.J. Costello & JJ Arcega-Whiteside that will be trouble for teams that load the box against Love and as I expect the young but talented freshman on the offensive side to struggle in their first tough road game at the CFF level, I’m taking Stanford to cover this small home spread.