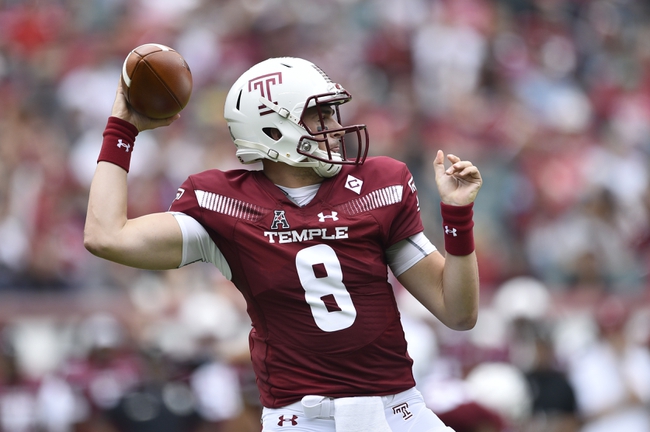 The Buffalo Bulls have a chance at a quick 2-0 start after beating Delaware State, 48-10. The Buffalo Bulls have lost four of their last six road games. Tyree Jackson is completing 63 percent of his passes for 189 yards, six touchdowns and zero interceptions. Jackson has 12 touchdown passes in his last three games. Anthony Johnson and K.J. Osborn have combined for 111 receiving yards and three touchdowns while Charlie Jones has two receptions. The Buffalo Bulls ground game is averaging 154 yards per contest, and Johnathan Hawkins leads the way with 37 yards on eight carries. Defensively, Buffalo is allowing 10 points and 275 yards per game. Matt Otwinowski leads the Buffalo Bulls with 10 tackles, Ledarius Mack has one sack and Devon Russell has one interception.

The Temple Owls need a bounce back performance after losing their opener to Villanova, 17-19. The Temple Owls have lost four of their last five home games. Frank Nutile is completing 56.3 percent of his passes for 185 yards, one touchdown and two interceptions. Nutile has at least one touchdown pass in each of his last seven games. Branden Mack and Ventell Bryant have combined for 134 receiving yards on 12 receptions while Isaiah Wright has three receptions. The Temple Owls ground game is averaging 46 yards per contest, and Ryquell Armstead leads the way with 31 yards on 14 carries. Defensively, Temple is allowing 31 points and 405 yards per game. Shaun Bradley leads the Temple Owls with 10 tackles, Quincy Roche has one sack and Sam Franklin has one interception.

The Buffalo Bulls looked good in their debut, but you don't get many brownie points for beating up on Delaware State. The Temple Owls struggled against Villanova for the second straight year and this time took the loss. I'm never trying to lay big numbers with Temple, a squad that plays close, ugly games every time it takes the field. The good news is this a nice bounce back spot for the Owls, as Buffalo struggles on the road and that Owls phyiscal running game is better than what it just showed. The Temple Owls are also 11-5 ATS in their last 16 games when a faovrite of at least three points. I'm not laying big numbers with Temple, but the home team by a touchdown here is more than reasonable.