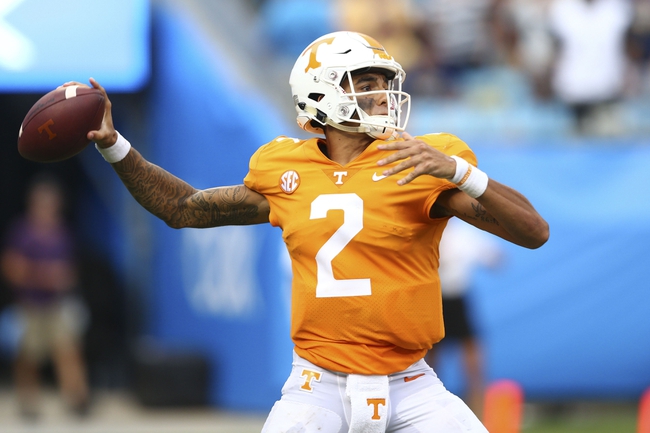 We have some opening week college football action from Neyland Stadium in Knoxville, Tennessee as the East Tennessee State Buccaneers take on the Tennessee Volunteers.

The East Tennessee State Buccaneers will look to keep their momentum going and pull off the upset after taking down D-II Mars Hill in their season opener by a final score of 28-7. Logan Marchi threw for 273 yards and 3 touchdowns on 17 of 29 passing, while Quay Holmes led ETSU with 118 rushing yards and a touchdown on 17 carries. Quan Harrison led the Bucs with 5 catches for 112 yards and a touchdown, while Kobe Kelley and Evan Wick each added a touchdown grab of their own in the win.

The Tennessee Volunteers will look to get one back in the win column after falling to West Virginia in their regular season opener by a final score of 40-14. Jarrett Guarantano threw for 17 yards and a touchdown on 19 of 25 passing, while Tim Jordan led the Vols on the ground with 20 carries for 118 yards and a rushing score. Marquez Callaway led Tennessee with 7 catches for 85 yards, while Dominick Wood-Anderson’s 1-yard catch ended up in the end zone for the touchdown. Defensively, the Vols forced a fumble that they also recovered while Shy Tuttle recorded a sack and Darrin Kirkland Jr. led the Vols with 4 tackles in the winning effort.

Trends will be updated when they’ve been released.

Tennessee isn’t the kind of team that should be laying numbers like this no matter who they’re facing, but the problem I have with East Tennessee State is that the Buccaneers have a tendency to get off to a slow start, as seen by them falling behind by a touchdown against a D-II school before finally waking up and getting the win. Tennessee hung around with West Virginia for the first half before letting things get away from them late, and I think the Vols do enough to correct their mistakes and use this as a tune-up game so I’ll lay the points with the Volunteers here.