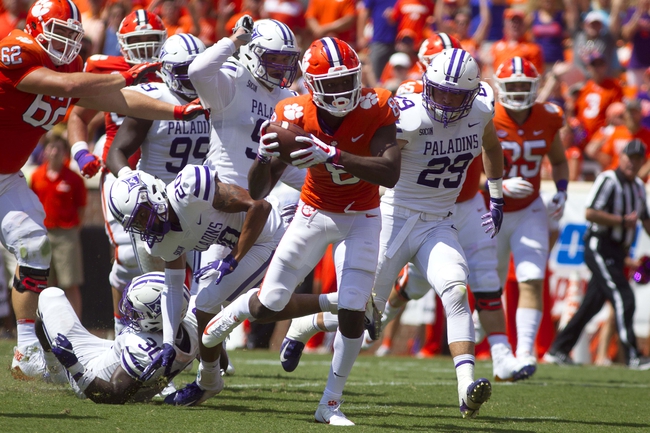 The #2 Clemson Tigers take on the Texas A&M Aggies from College Station, Texas in college football action on Saturday afternoon.

The Clemson Tigers will look to keep their momentum going after opening the season with a 48-7 pummelling of Furman in their regular season opener. Auburn’s QB conundrum was still left unanswered as Trevor Lawrence and Kelly Bryant split playing time, with Lawrence throwing for 137 yards and 3 touchdowns on 9 of 15 passing while Bryant logged 127 yards and a TD pass on 10 of 16 through the air. Lyn-J Dixon led Clemson with 89 rushing yards, while Travis Etienne and the aforementioned Bryant each had a rushing score in the win. Amari Rodgers led the Tigers with 44 receiving yards and a touchdown on 3 catches, while Braden Galloway, Justyn Ross and Diondre Overton each added a touchdown grab as well. The Tigers did a good job spreading the love amongst their receivers, with no receiver logging more than 3 receptions in the win. Clemson’s defense combined for 3 sacks while Christian Wilkins logged a team-high 6 tackles as the Tigers held Furman to just 163 yards of total offense in the game.

The Texas A&M Aggies will be hoping to extend their momentum for another outing after romping over Northwestern State by a final score of 59-7 in their last outing. Kellen Mond threw for 184 yards and 2 touchdowns on 17 of 25 passing, while Nick Starkel added a touchdown pass of his own on 5 of 8 passing with 63 yards. Trayveon Williams stole the show for the Aggie offense, with 20 carries for 240 yards rushing and 3 touchdowns while Kwame Etwi added 8 carries for 83 yards and a touchdown of his own. Mond also rushed for another score, while Jhamon Ausbon led the Aggies with 6 catches for 81 yards. Jace Sternberger recorded 5 catches for 56 yards and 2 touchdowns, while Jalen Preston added a touchdown grab of his own in the victory. Defensively, Buddy Johnson led the Aggies with 3 tackles while Texas A&M held Northwestern State to just 251 yards of total offense in the game.

This has potential to be the game of the week, and it’s safe to say both teams face a solid step up in competition this week. However, while Texas A&M as a home dog is sxtremely tempting, considering how tough College Station can be to play in as a visiting QB, Texas A&M has struggled ATS against the ACC, covering just once in their last 6 games, with the lone cover coming by just half a point in the Belk Bowl last season. Clemson has shown that they haven’t lost any depth and should be able to win this one by.a couple of touchdowns.