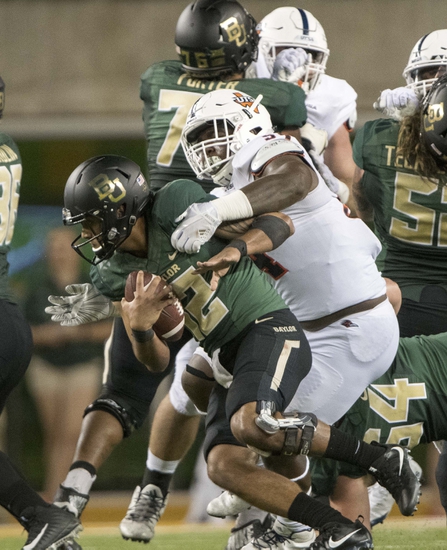 The Baylor Bears will travel to the Alamodome to take on the UT-San Antonio Roadrunners this upcoming Saturday night in College Football action.

The Baylor Bears started off last season with a shocking upset by Liberty and was going to make sure that history didn’t repeat itself this year as the Bears easily won their opener this season with a 55-27 victory over the D-11 Abilene Christian Wildcats. Baylor got off to a quick start as they raced to a 17-0 lead and pulled away early in the 3rd quarter after taking a 45-20 lead on a John Lovett 3-yard TD run. Baylor outgained the Wildcats by a 606-466 margin and had 26 first downs in the victory. Leading the way for the Bears was the RB duo of John Lovett and JaMycal Hasty who combined for 217 rushing yards and 5 TD’s in the victory. JaMycal Hasty also was productive as a receiver, hauling in 4 catches for 67 yards. QB Jalan McClendon completed 10 of 13 for 173 yards and 2 TD’s after coming in for starter Charlie Brewer who completed 8 for 15 passes for 138 yards and an INT. Leading the way for the Bears receivers were Denzel Mims (3 rec; 80 yds), Jalen Hurd (4 rec; 58 yards), and Chris Platt (3 rec; 40 yards). Baylor had a season to forget last year, finishing the season with a 1-11 record (1-8 Big 12), however, with plenty of weapons on both end should be much more competitive this season. Offensively, Baylor finished last year averaging just 24.3 ppg on 404.9 total yards per game (117.3 rushing yds/g; 287.7 passing yds/g). Defensively, the Bears will have some decent experience at the LB and CB positions and hope to improve on a defense that allowed 35.9 ppg last season on 456.9 total yards per game (189.9 rushing yds/g; 267.0 passing yds/g).

The UT-San Antonio Roadrunners did not get off to the season they expected as the were blown out by the Arizona State Sun Devils, 49-7, this past Saturday night. The Roadrunners came into this game just a 17.5 underdogs on the road, however, the Herm Edwards coached Sun Devils looked outstanding against the usually tough Roadrunners defense and put this game away early after taking a 28-0 lead at halftime. UT-San Antonio was outgained by Arizona State by a 503-221 margin and lost the turnover battle by a 3-0 margin. Leading the way for the Roadrunners was QB Cordale Grundy who completed 16 of 33 passes for 187 yards and a TD. Kirk Johnson Jr. (5 rec; 57 yards), Tariq Woolen (3 rec; 51 yards), and Greg Campbell Jr. (4 rec; 34 yards) led the way for the Roadrunners receivers. UT-San Antonio couldn’t establish any running game against the Sun Devils as they finished with just 33 rushing yards and was led by B.J. Daniels who had 24 yards and a TD on 9 carries. UT-San Antonio finished last season with a 6-5 overall record however, look like they’re going to take a step-back this season. Offensively, UT-San Antonio averaged just 23.5 ppg on 387.4 total yards per game (184.6 rushing yds/g; 202.8 passing yds/g) and will be inexperienced coming into this season returning just 3 offense starts. UT-San Antonio had one of the best defenses last season in the country, holding their opponents to an average of just 17.0 ppg on 287.8 total yards per game (127.7 rushing yds/g; 160.1 passing yds/g) however, might have a hard time producing those types of numbers again as defensive coordinator, Pete Golding, decided to take a position at Alabama.

Baylor is happy to get in the win columns right from the start this season as they didn’t win their first game until November last season, however, their has to be some concerns with the defense that allowed the FCS Abilene Christian to score 27 points after the Wildcats averaged just 19.0 ppg last season. UT-San Antonio had a disappointing start to their season in a big road game at Arizona State and will hope that the defense can pick themselves up off the floor as they need to be the strength of this team if they are going to have success. UT-San Antonio pulled off the 17-10 upset against the Bears last season and as I’m encouraged that the Roadrunners QB Cordale Grundy looked decent agianst the Sun Devils, I think the Roadrunners at home, will make this a competitive game. The line has yet to be released, however, as I’m expecting UT-San Antonio to be getting a good amount of points, I’m initially leaning towards the Roadrunners in this one.