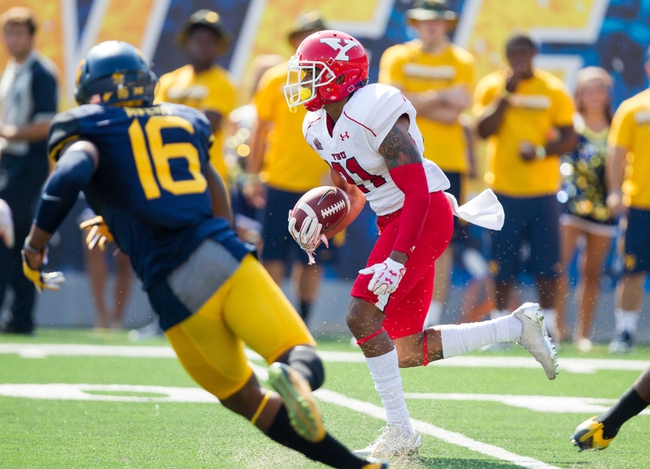 The Youngstown State Penguins will travel to Milan Puskar Stadium to take on the 17th ranked West Virginia Mountaineers this upcoming Saturday in College Football action.

The Youngstown State Penguins had a disappointing start to their season as although the Penguins were 37-point favorites going into their match-up agianst Butler, Youngstown State fell to the Bulldogs by a 23-21 margin yesterday afternoon. Youngstown State held a 21-7 lead entering the 4th quarter, however, allowed Butler to score 16 unanswered points which included a 44-yard game winning FG by Drew Bevelhimer with 4 seconds left in the game. Youngstown State outgained Butler by a 469-339 margin however, did lose the turnover battle by a 1-0 margin. Leading the way for Youngstown State was QB Montgomery VanGorder who completed 18 of 27 passes for 234 yards and 3 TD. RB Tevin McCaster had a nice game, rushing for 176 yards on 29 carries. Samuel St. Surin (5 rec; 85 yards; TD) and Kendric Mallory (4 rec; 78 yards; TD) led the way for the Penguins receivers. Youngstown State finished last season with just 6-5 (4-4 Missouri Valley) record however, is a solid program that was ranked in the top-25 of the FCS standing to start the season. Offensively, Youngstown State averaged 29.7 ppg on 411.1 total yards per game (222.5 rushing yds/g; 188.6 passing yds/g). The Penguins should be solid on the ground agianst with McCaster back after a rushing for 1066 yards last season to go along with 13 TD’s. Defensively, Youngstown State held their opponents to just 19.1 ppg last season on 316.9 total yards per game (173.2 rushing yds/g; 143.7 passing yds/g).

The 17th West Virginia Mountaineers opened off their season with an impressive 40-14 victory over the Tennessee Volunteers this past Saturday. West Virginia dominated on both ends of the field throughout the day and easily secured the victory after taking a 33-14 lead with 1:15 left in the 3rd quarter. West Virginia outgained Tennessee by a 547-301 margin and had 26 first downs in the victory. Leading the way for the Mountaineers was QB Will Grier who completed 25 of 34 passes for 429 yards and 5 TD’s. David Sills V (7 rec; 140 yards, 2 TD), Gary Jennings Jr. (6 rec; 113 yards; TD) and T.J. Simmons (1 rec; 59 yards, TD) all had nice games at the receiver position for West Virginia. The Mountaineers backfield was led by Martell Pettaway (9 carries; 56 yards) and Leddie Brown (8 carries; 33 yards). West Virginia finished last season with just a 7-6 (5-4 Big 12) record after struggling down the stretch of the season, however, the Mountaineers could contend for a Big 12 title this season as they should have one of the best passing attacks in the country led by Grier/Sills V. Offensively, West Virginia averaged 34.5 ppg on 459.6 total yards per game (150.3 rushing yds/g; 309.3 passing yds/g). Defensively, West Virginia lost a few key members from a defense that already struggled last season, allowing 31.5 ppg on 445.5 total yards per game (204.2 rushing yds/g; 241.4 passing yds/g). The Mountaineers looked solid in their efforts against Tennessee, however, if the Mountaineers want to contend for a Big-12 Championship this season, they’ll need their defense to keep them in games.

Out of all the upsets that happened in week one, Youngstown State’s was actually one of the bigger shockers in my eyes as although the Penguins might not be at the same level we’ve seen in past years, they should have had no trouble with the Butler Bulldogs. West Virginia had a convincing victory in their opener as will have one of the best passing attacks in the country this season as Grier and Sills V leading the way. The Mountaineers defense looked decent in their opener however, this is still a defense that will need to improve if West Virginia wants to contend for a CFF Playoffs spot. West Virginia is going to be favored heavily if this game is lined, however, I’m not going to write-off the Penguins just yet as they have a decent RB and still have solid defenders in LB Armand Dellovade and S Kyle Hegedus. Based on the performances of each of these teams in their openers, I think this line is going to be a little inflated if it’s released and as I’m not writing off Youngstown State’s season just yet, I’m leaning on taking the Penguins and the points if the line is going to be as big as I expect.