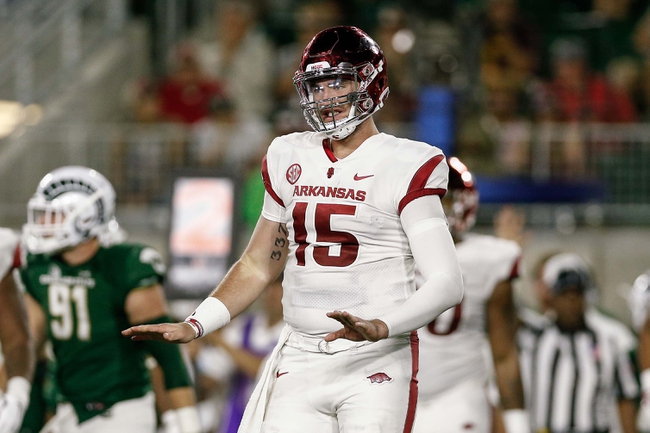 The North Texas Mean Green will look to remain unbeaten after improving to 2-0 with a 58-16 rout of Incarnate Word in their last outing. Mason Fine threw for 418 yards, 4 touchdowns and an interception on 25 of 40 passing while DeAndre Torrey rushed for 44 yards on 16 carries with 3 touchdowns. Rico Bussey Jr. led the Mean Green with 8 catches for 128 yards and 3 touchdowns while Jalen Guyton was North Texas’ other 100-yard receiver with 5 catches for 111 yards and a touchdown. North Texas’ D combined for a pair of interceptions and a fumble recovery while Kemon Hall led the Mean Green with 4 tackles in the victory.

The Arkansas Razorbacks will be looking to bounce back after a frustrating first loss of the season, blowing a 27-9 lead and allowing 25 unanswered points down the stretch to lose to Colorado State by a final score of 34-27. Cole Kelley threw for 102 yards on 6 of 9 passing with 2 touchdowns while Ty Storey threw for 36 yards and a pair of picks on 5 of 13 passing. Devwah Whaley racked up 165 yards and a touchdown on 26 carries while T.J. Hammonds and La’Michael Pettway each logged a TD grab in the losing effort. Defensively, Ryan Pulley recorded an interception and McTelvin Agim recorded a fumble recovery while D’Vone McClure led the Hogs with 5 tackles in the losing effort.

Most would think with a Power 5 team and a reasonable line that it would be a slam dunk. However, North Texas has been a covering machine against the SEC, and I’m not sure how anyone could have confidence in Arkansas after how they choked against Colorado State. North Texas has a really solid offense and should be able to do enough to keep this one close and give the Hogs a scare if not win outright. I’ll take the Mean Green and the points here.