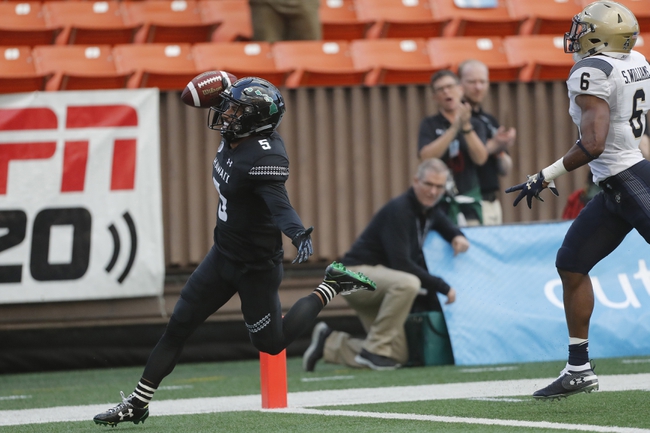 The Hawaii Warriors and the Army Black Knights meet in college football action from Blaik Field at Michie Stadium on Saturday afternoon.

The Hawaii Warriors will look to remain unbeaten after improving to 3-0 this season with a 43-29 victory over Rice in their last outing. Cole McDonald threw for 319 yards and 4 touchdowns on 22 of 33 passing while Fred Holly III led Hawaii in rushing with team-highs of 17 carries for 100 yards and 2 touchdowns. John Ursua led the Warriors’ receiving corps with 9 catches for 133 yards along with a touchdown, while Cedric Byrd caught a pair of touchdowns and Marcus Armstrong-Brown hauled in a TD grab of his own in the win. Defensively, Kaimana Padello recorded a pair of sacks and Zach Wilson logged an interception while Solomon Matautia led Hawaii with 8 tackles in the victory.

The Army Black Knights will look to build on their first win of the season after taking down Liberty by a final score of 38-14. Kelvin Hopkins Jr. led Army in passing with 61 yards and a touchdown on 2 of 7 through the air, while Darnell Woolfolk racked up 98 yards and 2 touchdowns on the ground. Caleb Holt and Connor Slomka each racked up a touchdown and 71 rushing yards while Fred Cooper logged 81 rushing yards and Christan Hayes’ lone reception went 44 yards for a touchdown. On defense, the Black Knights logged a pair of sacks and James Nachtigal led the Black Knights with 5 tackles while Army allowed Liberty to rack up 417 yards of offense in the game.

The option offense of Army is hard to stop, but it is possible as Duke proved in Army’s season opener. Hawaii hasn’t had much luck defensively, but they haven’t needed it as their offense has carried the load, and the Warriors have already taken down an option-based offensive opponent, defeating Army two weeks ago. All in all, this is a game I have the Warriors winning outright but just to be safe I’ll take the points with Hawaii in this one.