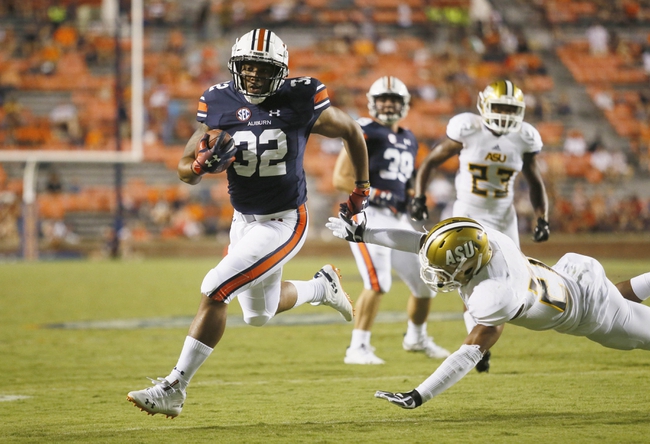 The #12 LSU Tigers and the #7 Auburn Tigers square off in one of the marquee college football games of the week from Jordan-Hare Stadium on Saturday afternoon.

The LSU Tigers will look to build on a 2-0 start following their 31-0 win over Southeastern Louisiana in their last outing. Joe Burrow threw for 151 yards and 2 touchdowns on 10 of 20 passing, while also rushing for a 3rd score as well. Nick Brossette rushed for 137 yards on 19 carries while Clyde Edwards-Helaire logged a rushing TD as well. Stephen Sullivan and Ja’Marr Chase each had a receiving TD, with Sullivan leading LSU with 54 yards receiving while Chase caught a team-high 3 passes. On defense, LSU did is all, logging 5 sacks and a pair of fumble recoveries while Devin White led LSU with 9 tackles in the win.

The Auburn Tigers will alsobbe looking to keep undefeated after improving to 2-0 with a 63-9 rout of Alabama State. Jarrett Stidham threw for 113 yards and a touchdown on 6 of 11 passing, while JaTarvious Whitlow rushed for a team-high 122 rushing yards and Shaun Shivers added 117 yards and a touchdown on the ground. Shivers was one of 6 Auburn players to register a rushing TD in the win, while Anthony Schwartz and Ryan Davis each had a team-high 3 grabs with Schwartz logging 67 yards and a touchdown. Daniel Thomas recorded a pair of interceptions, including a pick-six, as Auburn combined for 3 interceptions and 4 sacks with DeShaun Davis leading the Auburn D with 4 tackles.

This has the potential to be a tight, low-scoring game and could go either way. However, my edge goes to Auburn. LSU has had a couple of decisive wins, but if we’re being honest, LSU probably should’ve won by a lot more, and LSU also had periods where they struggled against Southeastern Louisiana. Auburn made quick work of Alabama State and since the defenses cancel out in my opinion, I have to go with the team with the more consistent offense and that’s Auburn.