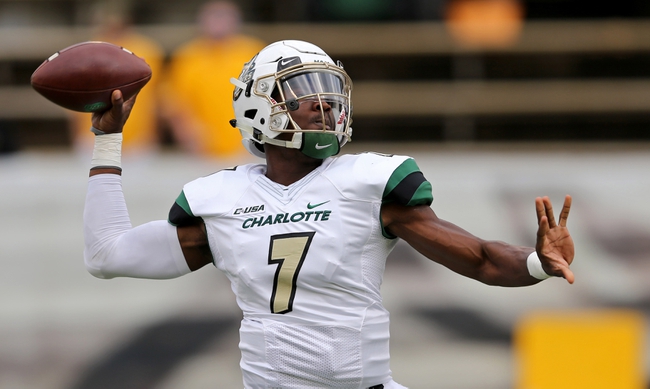 NOTE: THIS GAME WAS MOVED UP TO THURSDAY, SEPTEMBER 13 DUE TO THE WEATHER. CHARLOTTE TOOK A 28-25 VICTORY IN A VERY COMPETITIVE MATCHUP.

The Old Dominion Monarchs and the Charlotte 49ers will be meeting up on the college football gridiron on Saturday at Jerry Richardson Stadium.

The Monarchs are 0-2 on the season so far. Old Dominion has taken losses to Liberty 52-10 in their opener and FIU 28-20 this past Saturday.

Steven Williams leads the Monarchs QBs on 292 yards with one TD, while Jeremy Cox is the top rusher on 77 yards and 25 carries. Old Dominion’s lead receiver is Jonathan Duhart with 233 yards and two TDs.

Charlotte had some luck opening the year, taking a 34-10 win over Forham in their first game. Things didn’t go well against Appalachian State this past Saturday though, as the Niners lost 45-9.

49ers QB Chris Reynolds has 375 yards with one TD and one pick, and Benny LeMay leads the rush on 170 yards and two scores. Victor Tucker is the top Niners receiver on 160 yards and a TD from 11 grabs.

There’s not much to like about Old Dominion so far, and nothing to indicate they’ll dig themselves out of this hole they’ve begun in the early-going. The one bright spot on offense for the Monarchs is Duhart, and he’ll have to go crazy statistically if he wants to keep his team win this game. I’m not super-jazzed about Charlotte here either, but they’re the lesser of two evils. Give me the Niners.