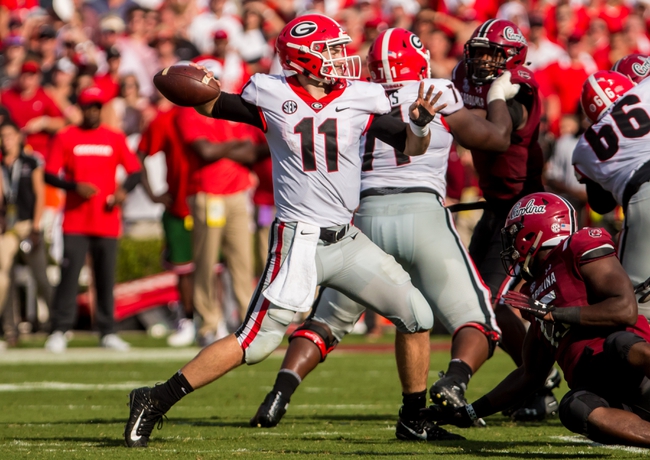 The Middle Tennessee State Blue Raiders and the #3 Georgia Bulldogs square off in college football action from Sanford Stadium on Saturday night.

The Middle Tennessee State Blue Raiders will look to build on a 61-37 win over UT-Martin in their last outing. Brent Stockstill led the Blue Raiders by throwing for 296 yards on 23 of 32 passing with 5 touchdowns. Chaton Mobley rushed for 66 yards and a pair of touchdowns on 14 carries while Brad Anderson racked up 6 catches for 141 yards. Patrick Smith caught 5 passes for 87 yards and 3 touchdowns while CJ Windham added 3 catches for 86 yards and two scores. Wayne Parks added a punt return touchdown while Gregory Grate Jr chipped in a pick-six to close out the scoring for the Blue Raiders as Middle Tennessee logged 5 sacks and 2 picks as a team, including a pair of sacks from DQ Thomas while Wesley Bush led Middle Tennessee with 9 tackles.

The Georgia Bulldogs will look to stay atop the college football mountain after improving to 2-0 this season with a 41-17 beatdown of South Carolina in their last outing. Jake Fromm threw for 194 yards and a touchdown on 15 of 18 passing with an interception, while Elijah Holyfield led Georgia in rushing with 76 yards and a TD. D’Andre Swift and Brian Herrien each added a rushing score while Mecole Hardman added 6 receptions with 103 receiving yards and a touchdown to lead the Bulldogs’ receiving corps. Georgia combined for a pair of interceptions and D’Andre Walker recorded a sack while Richard LeCounte led the Bulldogs’ D with 7 tackles in the win.

Middle Tennessee had a solid game offensively, but let’s face it, UT-Martin isn’t a tough opposition defensively, and it’s a bit alarming that the Blue Raiders allowed 37 points and 460 yards of total offense in the win. Those numbers won’t fly against a solid Bulldogs team from top to bottom that just went on the road and demolished a very good South Carolina team and it certainly won’t do in Athens. I’ll lay the points with Georgia as I think this one ends in another Georgia rout.