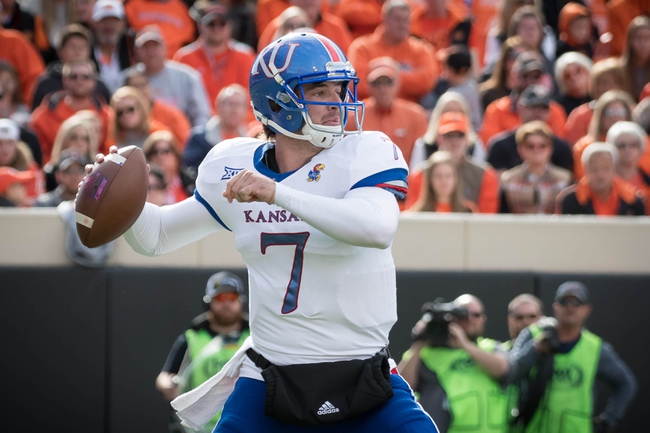 The Kansas Jayhawks have a chance to win back-to-back games for the first time since September of 2011. The Kansas Jayhawks have lost seven straight home games. Peyton Bender is completing 59 percent of his passes for 317 yards, three touchdowns and zero interceptions. Bender has five touchdown passes in his last three games. Kerr Johnson Jr. and Steven Sims Jr. have combined for 181 receiving yards and three touchdowns while Stephon Robinson Jr. has four receptions. The Kansas Jayhawks ground game is averaging 136 yards per contest, and Pooka Williams Jr. leads the way with 125 yards and two touchdowns. Defensively, Kansas is allowing 16.5 points and 304.5 yards per game. Joe Dineen Jr. leads the Kansas Jayhawks with 30 tackles, Kyron Johnson has one sack and Shakial Taylor has one interception.

It's not often you see the Kansas Jayhawks as a favorite regardless of where the game is played. Kansas has been favored at home just five times since 2015 and has failed to cover each of the last four games. Getting points to simply fade Kansas seems like a dream come true, as you don't get this chance often. However, the Rutgers Scarlet Knights haven't played well to start the season and Sitkowski is currently questionable with an arm injury. The Kansas Jayhawks finally snapped the massive road losing streak and have to be feeling good about themselves. I'll lay the field goal with Kansas at home, although there are much better games on the card. You must like pain in your life if you're seriously betting this game.