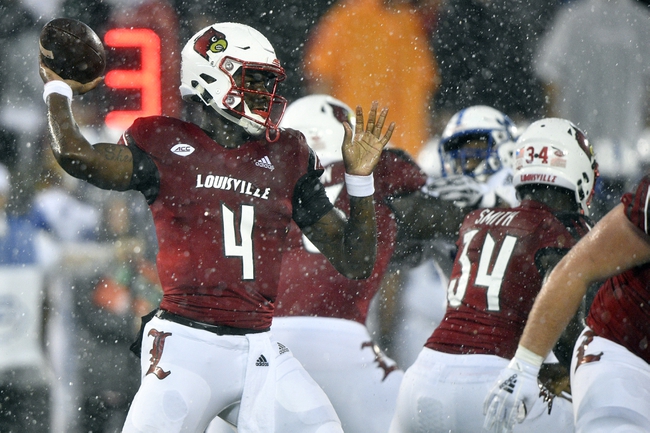 The Western Kentucky Hilltoppers will meet up with the Louisville Cardinals in college football action from Papa John’s Cardinal Stadium on Saturday.

Western Kentucky comes into this one at 0-2 on the season so far. The Hilltoppers got beat up by a good Wisconsin team 34-3 in their opener, then fell 31-28 against Maine.

Drew Eckels leads the WKU offense, tossing for 514 yards and three scores so far. Garland LaFrance is the top rusher for the Toppers with 37 yards on nine carries, while Lucky Jackson has 137 yards and two TDs from eight grabs.

As for Louisville, they’re sitting at 1-1 on the young campaign. The Cardinals could’t get much going in their opener against Alabama and lost 51-14, but showed some dominance this past Saturday against Indiana State with a 31-7 win.

Leading the Cardinals at QB is the aptly-named Jawon Pass, who has 341 yards, two TDs and three picks. Colin Wilson leads the Louisville rushers on 58 yards, and Seth Dawkins has 80 yards from five catches.

I’m throwing out the Wisconsin game when assessing WKU’s performance on this young season, as it was a bad-luck draw coming out of the gate. It’s a little encouraging that the Hilltoppers played better against Maine, but that’s still a game they should have won. Louisville needs to assert themselves in these smaller-school games before they run through the ACC gauntlet, and they’re taking care of business so far. I’m going to stick with the Cardinals here for the cover, as the line seems just thick enough to be realistic.