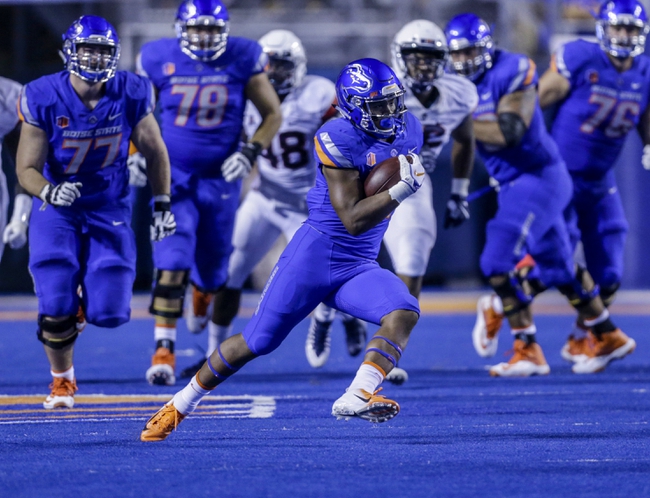 The Boise State Broncos will take on the Oklahoma State Cowboys in college football action from Boone Pickens Stadium on Saturday in a great nationally-televised matchup.

Brett Rypien leads the Broncos at QB this year, and he’s got 667 yards with seven touchdowns so far. Alexander Mattison is the top Boise rusher with 171 yards and three scores while Sean Modster has 13 catches for 241 yards and two TDs.

As for Oklahoma State, they’re 2-0 this year as well. The Cowboys beat up on Missouri State 58-17 in the opener, then did the same thing to South Alabama this past Saturday with a big 55-13 victory.

Taylor Cornelius leads the Cowboys’ offense, throwing for 728 yards, six TDs and three picks so far. Justice Hill is the lead OK State rusher with 154 yards and three touchdowns while Tylan Wallace has 214 yards and two TDs from 14 catches.

Meanwhile, the Cowboys are 7-1 ATS in the last eight non-conference games and 5-2 ATS in their last seven following a straight-up win of more than 20 points. The over is 7-1 in OK State’s last eight overall and 72-32-2 in their last 106 home games.

Boise State has been nothing short of impressive this season, displaying plenty of offensive prowess. Detractors will say the Broncos haven’t been challenged yet, but they’ll get that opportunity here. Similarly, you could say the same thing about the Cowboys, who have amassed some nice statistical performances. This should be a spectacular matchup; probably somewhere in coin-flip territory as these teams have both performed up to and beyond expectation. I’m going to go with Boise to eke out a tight victory but realistically I’m not going near it.