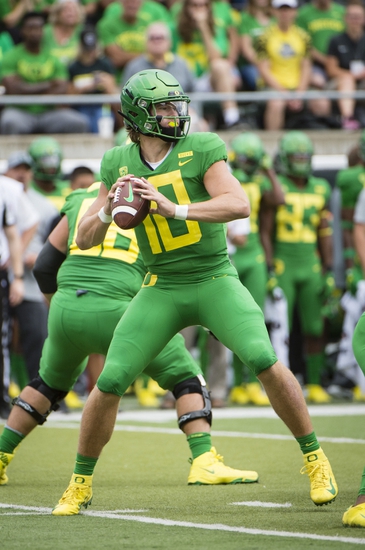 The San Jose State Spartans will travel to Autzen Stadium to take on the 20th ranked Oregon Ducks this upcoming Saturday night in College Football action.

The San Jose State Spartans dropped to 0-2 on the season after being defeated by the Washington State Cougars, 31-0, this past Saturday. San Jose State trailed by a 24-0 margin at halftime and although their defense performed better in the 2nd half, the Spartans offense had no answers for the Cougars defense in this one. San Jose State was outgained by Washington State by a 544-109 margin and converted on just 2 of 13 third-down attempts. Leading the way for the Spartans offense was WR Josh Oliver who had 5 receptions for 51 yards. Offensively, in their two games agianst UC-Davis and Washington State, San Jose State is averaging 19.0 ppg on 307.5 total yards per game (232.5 passing yds/g; 75.0 rushing yds/g). Offensively, San Jose State has been led by QB Montel Aaron who had completed 59.1% of his passes for 2 TD & 0 INT while averaging 174.0 yds/g. Aaron’s top targets on the season have been WR Bailey Gaither (4.0 rec/g; 70 yds/g; 2 TD) and TE Josh Oliver (13 rec; 68.5 yds/g). The Spartans haven’t gotten much out of the running game early on the season and will hope the duo of Tyler Nevens (9.0 att/g; 39.5 yds/g; 2 TD) and DeJon Packer (10.0 att/g; 41.0 yds/g) can find ways to produce more as the season goes on. Defensively, San Jose State is allowing their opponents to average 37.5 ppg on 566.5 total yards per game (133.5 rushing yds/g; 433.0 passing yds/g).

The 20th ranked Oregon Ducks improved to 2-0 on the season after they had little trouble defeating the FCS Portland State Vikings, 62-14, this past Saturday. Oregon moved the ball at will agianst the Vikings and had no trouble securing the victory after taking a 35-7 lead at halftime. Oregon outgained Portland State by a 562-224 margin and completed 7 of 11 third down attempts in the victory. Leading the way for the Ducks was QB Justin Herbert who completed 20 of 26 passes for 250 yards and 4 TD’s. In their two games against Bowling Green and Portland State this season, the Ducks are averaging 60.0 ppg on 533.0 total yards per game (254.0 rushing yds/g; 279.0 passing yds/g). Offensively, Oregon has been led by their Heisman hopeful QB, Justin Herbert, who has completed 63.8% of his passes for 9 TD & 2 INT while averaging 265.5 passing yds/g. Herbert has done a nice job spreading the ball around to multiple receivers as 13 different Ducks players have a reception already this season, led by WR Jaylon Reed (2.5 rec/g; 58.5 yds/g; 3 TD) and RB Taj Griffin (1.0 rec/g; 44.5 yds/g; TD).  The Oregon backfield duo of CJ Verdell (12.0 att/g; 78.5 yds/g; TD) and Tony Brooks-James (13.0 att/g; 67.0 yds/g; 2 TD) have been solid for the Ducks. Defensively, Oregon is holding their opponents to an average of 19.0 ppg on 306.5 total yards per game (101.0 rushing yds/g; 205.5 passing yds/g).

It looks like it’s going to be another long season for the San Jose State Spartans as not only they did loss to a sub-par FCS team in the UC-Davis Aggies to start their season, but they also had no answers on either end of the ball against the Washington State Cougars. It’s hard to judge how good this Oregon team is at this point as they have played inferior competition in their first two games of the season and we probably will have to wait until next week in their home match-up against Stanford to find out, as playing San Jose State should not be much of a challenge. Oregon has one of the best QB’s in the league in Justin Herbert who should have no problem moving the ball agianst the Spartans defense and although this is a huge number, Oregon always seems to continue to pile on the points after the game is well and hand and I think they do enough in this one to cover this monster spread. Take Oregon to cover.