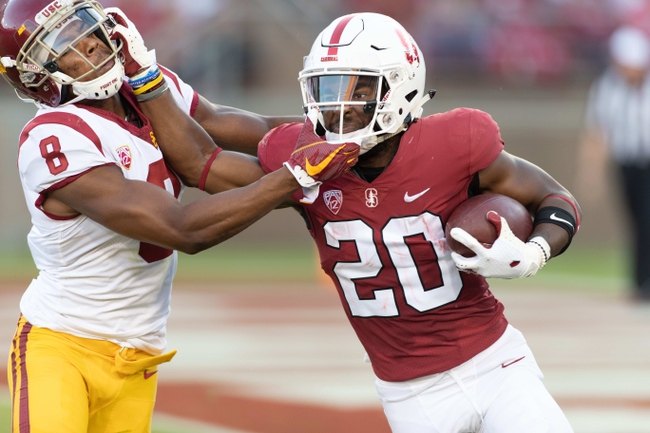 The UC-Davis Aggies will travel to Stanford Stadium to take on the 9th ranked Stanford Cardinal this upcoming Saturday afternoon in College Football action.

The FCS UC-Davis Aggies improved to 2-0 on the season after upsetting the FBS San Jose State Spartans in their season opener, the Aggies follow-up that performance with an impressive 54-21 victory over the San Diego Toreros this past Saturday. UC-Davis led by just a 27-21 margin entering the 4th quarter after leading 20-0 at halftime, however, ensured San Diego didn’t secure the come from behind victory after scoring 27 unanswered points in the 4th quarter for the victory. UC-Davis outgained San Diego by a 376-296 margin and won the turnover battle by a 2-1 margin. Leading the way for the Aggies was QB Jake Maier who completed 24 of 48 passes for 302 yards and a TD. On the season, UC Davis hasn’t had any trouble finding ways to score the football as the Aggies are averaging 49.0 ppg on 230.5 total yards per game (119.5 rushing yds/g; 411.0 passing yds/g). Offensively, UC-Davis has been led by Jake Maier who is completing 59.2% of his passes for 4 TD & 1 INT while averaging 374.0 passing yd/s game. Maier’s top targets have been Jared Harrell (11 rec; 84.0 yds/g; 2 TD), Khris Vaughn (7 rec; 74.5 yds/g), and Keelan Doss (15 rec; 63.0 yds/g). Leading the way for the Aggies backfield has been Ulonzo Gilliam who had 5 rushing TD’s on the season while averaging 89.0 rushing yds/g. Defensively, UC-Davis is allowing their opponents to average 29.5 ppg on 433.5 total yards per game (103.0 rushing yds/g; 330.5 passing yds/g).

The Stanford Cardinal continued their strong start to the season as after taking care of business of San Diego State in their season opener, they improved to 2-0 on the season after defeating the 17th ranked USC Trojans, 17-3, this past Saturday night. Stanford led by a 14-0 margin at halftime and had no trouble securing the victory behind a strong defensive effort. Stanford outgained USC by a 342-332 margin and won the turnover battle by a 3-0 margin in the victory. Leading the way for the Cardinal was their Heisman hopeful RB, Bryce Love who had 136 rushing yards and a TD on 22 carries. Offensively, Stanford is averaging 24.0 ppg on 362.0 total yards per game (104.5 rushing yds/g; 257.5 passing yds/g). Leading the way for the Stanford offense is RB Bryce Love, who although got off to a slow start agianst a tough San Diego State defense, has a TD on the season while averaging 82.5 rushing yds/g on 20 att/g. QB K.J. Costello has looked solid as he has completed 63.8% of his passes for 5 TD & 1 INT while averaging 257.5 passing yds/g. The leading receivers for Costello have been JJ Arcega-Whiteside (5.0 rec/g; 144.0 yds/g 3 TD), Trenton Irwin (5.0 rec/g; 31.0 yds/g) and TE Colby Parkinson (2.5 rec/g; 26.5 yds/g; 2 TD). Defensively, Stanford has been outstanding to open the season as they are holding two quality opponents in San Diego State and USC to just 6.5 ppg on 297.5 total yards per game (132.0 rushing yds/g; 165.5 passing yds/g). DB Malik Antoine has been outstanding in the secondary for the Cardinal has already has 2 INT on the season.

UC Davis has had a nice start to their season, but reality is going to come crashing on the Aggies pretty quickly when they face off agianst Stanford on the road this upcoming Saturday. UC Davis did get a feel-good victory over the FBS San Jose State Spartans, however, let’s not forget that the Spartans aren’t better than probably have the FCS schools out there and as the Aggies were projected to be nothing more than an average team in the Big Sky this season, I don’t think we can expect much against a team like Stanford. Stanford has some questions on the defensive end coming into the season however, has been outstanding against two quality opponents and their offense actually looks more dangerous this year as if teams decide to load the box against Bryce Love, QB K.J. Costello is more than capable of beating opponents through the air. This is going to be a monster number so my initial thoughts is to go with Stanford if a 1H number is lined as although I think they’ll win big, I might be hesitant to go with the Cardinal on the game line as I can see a backdoor cover by the Aggies with the Cardinals resting the majority of their starters in the 2nd half with a trip to Oregon the following weekend.