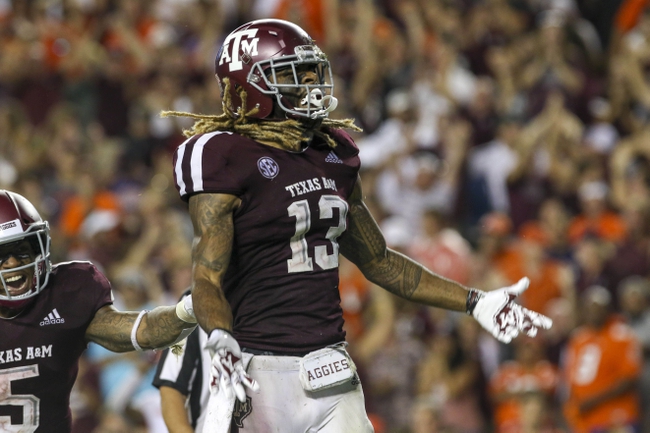 The Louisiana-Monroe Warhawks and the Texas A&M Aggies duke it out in college football action from College Station on Saturday night.

The Louisiana-Monroe Warhawks will look to pull off the upset and remain unbeaten after improving to 2-0, squeaking past Southern Miss by a final score of 21-20 in their last outing. Caleb Evans threw for 195 yards and 2 touchdowns on 15 of 28 passing, while Austin Vaughn led ULM in rushing with 85 yards on 9 carries. Marcus Green logged 4 receptions for 96 yards and both offensive touchdowns while Sam Miller opened the scoring for the Warhawks with a fumble recovery in the end zone for a TD. The Warhawks combined for a pair of fumble recoveries, a pair of interceptions and 5 sacks, including 2 sacks from Donald Louis Jr. who shared the team-lead with 5 tackles with Collin Turner in the win.

The Texas A&M Aggies will look to bounce back after narrowly falling short against Clemson by a final score of 28-26 for their first loss of the season. Kellen Mond threw for a whopping 430 yards and 3 touchdowns on 23 of 40 passing, while also leading A&M in rushing with 33 yards on 10 carries. Kendrick Rogers led A&M with 7 catches for 120 yards and 2 touchdowns while Camron Buckley added 4 catches for 93 yards and Quartney Davis contributed a TD grab of his own in the loss. On defense, A&M logged a single sack coming from Justin Madubuike while Tyrel Dodson led the Aggies with 5 tackles as Texas A&M held Clemson to 4 for 13 on 3rd downs and 14 1st downs in the game.

The Warhawks had a solid rally against USM, and should be proud of that win. However, going into College Station and dealing with the 12th man is a task unlike any other, and I simply think the Warhawks will be in over their heads going against the likes of Mond, Rogers and Trayveon Williams. The Aggies will surely use this game to take out some frustration after coming so close to pulling off the upset, so I’ll lay the points with the Aggies in this spot.