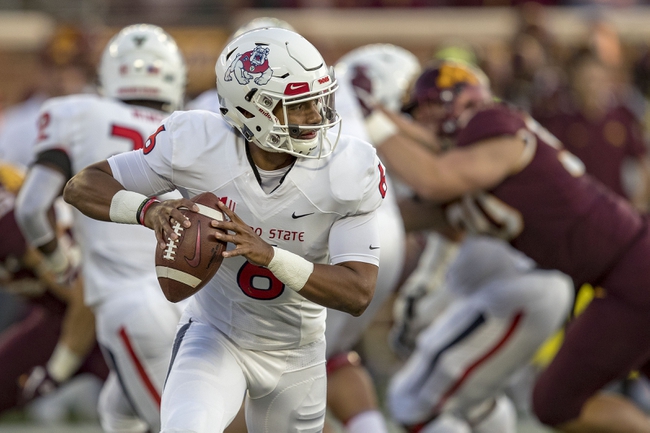 The Fresno State Bulldogs will travel to the Rose Bowl to take on the UCLA Bruins this Saturday night in College Football action.

The Fresno State Bulldogs dropped to 1-1 on the season after being defeated by the Minnesota Golden Gophers, 21-14, this past Saturday. Fresno State held a 14-13 lead midway through the 4th quarter, however, allowed Minnesota to retake the lead with a Seth Green 3-yd TD run with 3:28 left and although they had a chance to tie it late, the Bulldogs threw an INT on 1st & Goal at the Minnesota 4-yard line with 1:24 left in regulation to seal their fate. Fresno State was outgained by Minnesota by a 307-299 margin and lost the turnover battle by a 2-1 margin. Leading the way for the Bulldogs was QB Marcus McMaryion who completed 23 of 32 passes for 205 yards, 2 TD, and an INT. Offensively, after their two games agianst Idaho and Minnesota, Fresno State is averaging 46.5 ppg on 392.5 total yards per game (229.5 passing yds/g; 163.0 rushing yds/g). Leading the way for the Bulldogs this season has been QB Marcus McMaryion who had completed 72.4% of his passes for 2 TD & 1 INT while averaging 206.0 passing yds/g. The top receivers for the McMaryion and the Bulldogs have been WE KeeSean Johnson (6.0 rec/g; 103.5 yds/g; TD) and TE Jared Rice (5.0 rec/g; 43.5 yds/g; TD). Defensively, Fresno State is allowing their opponents to average 17.0 ppg on 307.0 total yards per game (190.0 passing yds/g; 117.0 rushing yds/g).

Fresno State finished last year with a 10-4 record which included a 33-27 victory in the Hawaii Bowl agianst Houston and showed with their tough effort on the road in Minnesota, that they are going to be a very solid club again. UCLA didn’t expect to be able to contend with Oklahoma however, they still have to be upset with their opening season loss to a rebuilding team at home. At this time, we currently don’t know who will be under center for the Bruins as even if Wilton Speight is available to play (missed last week w/ an injury), I wouldn’t be surprised to see Chip Kelly stick with the Freshman, Dorian Thompson-Robinson we saw flashes of his potential agianst Oklahoma and he has more of a style that fits a Chip Kelly type of offense. The Bulldogs have the talent to beat UCLA and although I’ll have to wait to see where the line falls in this one, I’m initially leaning taking the Bulldogs even if they have to cover a small road spread.