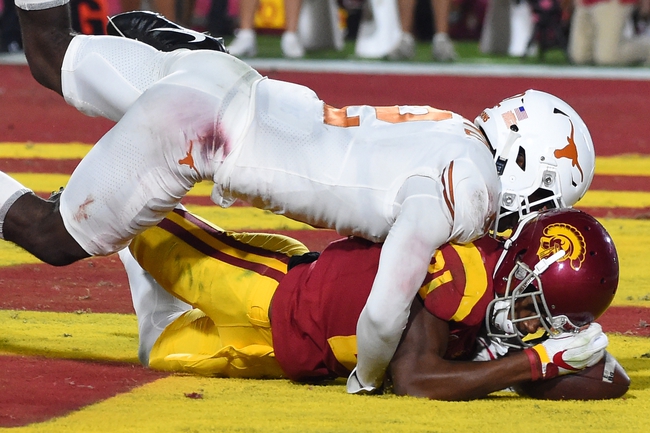 The USC Trojans need a statement victory here to get a game above a .500 record. The USC Trojans have split their last six road games. JT Daniels is completing 53.6 percent of his passes for 497 yards, one touchdown and two interceptions. Daniels enters this game with 69 career pass attempts under his belt. Amon-Ra St. Brown and Tyler Vaughns have combined for 258 receiving yards and one touchdown while Michael Pittman Jr. has four receptions. The USC Trojans ground game is averaging 166.5 yards per contest, and Aca'Cedric Ware leads the way with 159 yards and one touchdown. Defensively, USC is allowing 19 points and 373.5 yards per game. Cameron Smith leads the USC Trojans with 16 tackles, Porter Gustin has 1.5 sacks and Iman Marshall has two pass deflections.

The Texas Longhorns also need a big victory to get a game above a .500 record to help satisfied a frustrated fanbase. The Texas Longhorns have won four of their last six home games. Sam Ehlinger is completing 63.6 percent of his passes for 500 yards, four touchdowns and two interceptions. Ehlinger has two touchdown passes in three of his last five games. Lil'Jordan Humphrey and Collin Johnson have combined for 287 receiving yards and two touchdowns while Devin Duvernay has five receptions. The Texas Longhorns ground game is averaging 191.5 yards per contest, and Tre Watson leads the way with 126 yards on 30 carries. Defensively, Texas is allowing 27.5 points and 380 yards per game. P.J. Locke III leads the Texas Longhorns with 14 tackles, Kris Boyd has one sack and Caden Sterns has one interception.

USC is battle tested after playing Stanford last week, but this club is inexperienced and has been awful ATS on the road the last couple of years. Texas seems to be the same Texas team its been the past few seasons, untrustworthy and inconsistent. However, the Longhorns are due for a breakout performance and need a big win in the worst way to kind of settle things. The USC Trojans have failed to cover nine of their last 10 games when an underdog of at least three points. The Texas Longhorns have failed to cover each of their last four games when favored by at least three points. Either way, I trust the Longhorns a bit more than I do this young USC squad that's being forced to play back-to-back tough road games. We didn't see enough from the Trojans last week to think they can bounce back and win a game this big.