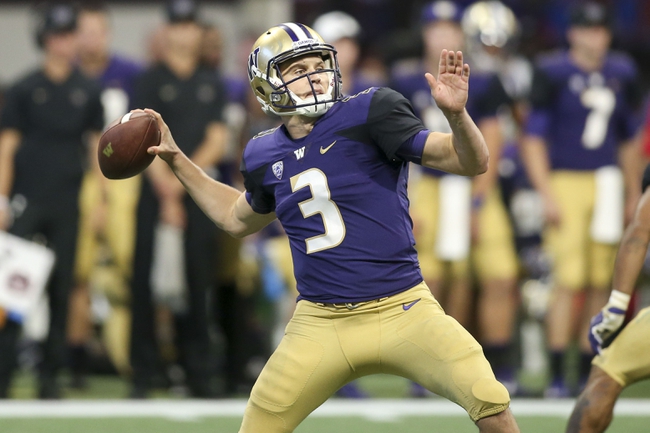 The 10th ranked Washington Huskies will travel to Rice-Eccles Stadium to take on the Utah Utes this upcoming Saturday night in College Football action.

The Utah Utes improved to 2-0 on the season after defeating the Northern Illinois Huskies, 17-6, this past Saturday. Utah was down by a 7-6 margin midway though the 4th quarter and it was the defense that helped secure the win in this one as the Utes pulled away after a 40-yd INT return by Chase Hansen secured the victory for Utah. Utah outgained Northern Illinois by a 354-228 margin however, did commit two turnovers in the victory. Leading the way for the Utes was RB Zack Moss who had 66 rushing yards and the Utes only offensive TD in the game. Offensively, in their two games agianst FCS Weber State and Northern Illinois, Utah is averaging 29.0 ppg on 470.5 total yards per game (302.5 passing yds/g; 168.0 rushing yds/g). Leading the way for the Utah offense is QB Tyler Huntley who has completed 63.4% of his passes for 4 TD & 1 INT while averaging 282.5 passing yds/g. Huntley hasn’t done much on the ground this season, but certainly has the ability to rush for a big gain when needed. Leading the way in the Utes backfield has been RB Zach Moss who has 2 TD’s on the season while averaging 108.0 rushing yds/g. The top receivers for the Utes have been Britain Covey (7.5 rec/g; 104.0 yds/g), Jaylen Dixon (1.5 rec/g; 45.0 yds/g), and Siaosi Mariner (3.5 rec/g; 45.0 yds/g; TD). Defensviely, Utah is holding their opponents to an average of 8.0 ppg on 143.5 total yards per game (62.0 passing yds/g; 81.5 rushing yds/g).

Utah is always a tough place to play, however, I’m a bit concerned for the Utes offense in this game agianst a Washington defense after they performance they just put up agianst Northern Illinois. After their opening season loss to Auburn, Washington knows they need to run the table with impressive victories to have a chance to be in the FBS Playoff picture this season and as they are the more talented team on both sides of the ball, I think the Huskies do enough in this one to cover this single-digit spread on the road. Take Washington to cover.