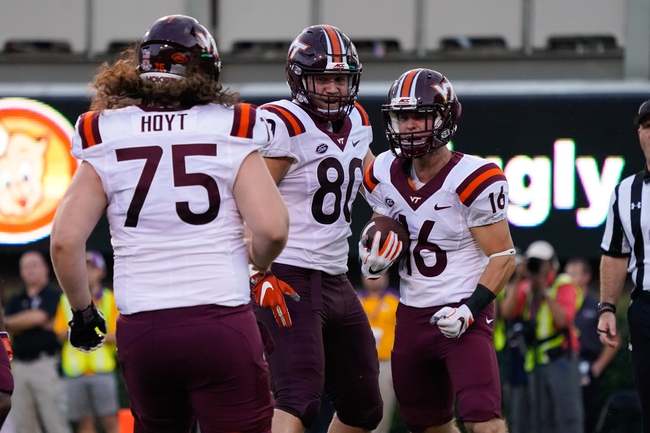 THIS GAME HAS BEEN CANCELLED DUE TO WEATHER. THERE IS NO IMMEDIATE INFORMATION AVAILABLE AS TO WHEN AND IF IT WILL BE RESCHEDULED.

The East Carolina Pirates will visit the Virginia Tech Hokies at Lane Stadium on Saturday in college football action.

The Pirates are sitting at 1-1 on the year so far. East Carolina took a tough loss to NC A&T 28-23 in the opener, but then bounced back with a convincing victory over in-state rivals North Carolina 41-19.

East Carolina QB Reid Herring is sitting on 599 yards, three touchdowns and two picks, while Trevon Brown leads the receivers with 147 yards and one TD. Anthony Scott is the top rusher for the Pirates with 107 yards and one score.

Over on the Virginia Tech side, they’re sitting pretty at 2-0 after a pair of big wins. The Hokies took out Florida State 24-3 in the opener, then beat up on William & Mary 62-17 this past Saturday.

Josh Jackson leads the Virginia Tech offense on 424 yards and three touchdowns, with his favorite target being Damon Hazleton, who has 129 yards and two scores. Deshawn McClease is the lead rusher for the Hokies with 112 yards and one score.

East Carolina should obviously be sitting at 2-0 so far, but reading too much into their big win over a bad North Carolina team is probably not the way to go right now. Conversely, there’s not a whole lot to dislike about Virginia Tech on paper, as they seem to be pretty well-balanced and aren’t having much difficulty thus far. Unless you can find a line that’s simply too ridiculous to believe, I can’t see picking against Virginia Tech to cover here.

The pick in this article is the opinion of the writer, not a Sports Chat Place site consensus.
Previous Pick
New Mexico State vs Dixie State College Football Picks, Odds, Predictions 3/7/21
Next Pick
College Football News: What Colleges Are The Top Producers of NFL Talent?