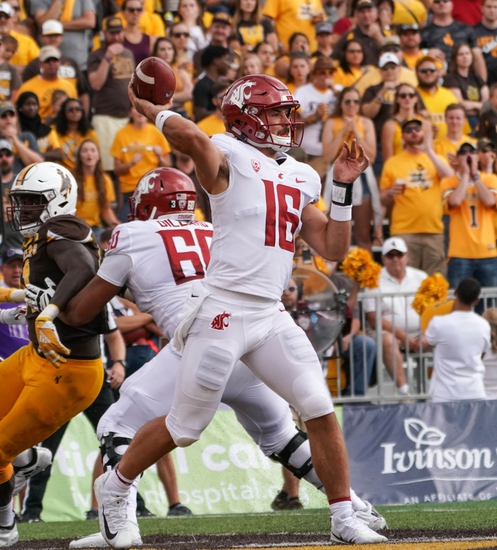 The Eastern Washington Eagles will travel to Martin Stadium to take on the Washington State Cougars this upcoming Saturday night in College Football action.

The Washington State Cougars improved to 2-0 on the season after defeating the San Jose State Spartans, 31-0, this past Saturday. Washington State raced out to a 24-0 lead by halftime and had no trouble securing the victory after the San Jose Spartans has no answers on the offensive end for the Cougars defense. Washington State outgained San Jose State by a 544-109 margin however, did lose the turnover battle by a 3-1 margin. Leading the way for the Cougars was QB Gardner Minshew II who completed 34 of 51 passes for 414 yards, 3 TD’s, and 2 INT. Offensively, in their two games against Wyoming and San Jose State, the Cougars are averaging 36.0 ppg on 469.0 total yards per game (369.5 passing yds/g; 99.5 rushing yds/g). Offensively, Washington State has been led by QB Gardner Minshew II who has completed 66.7% of his passes for 6 TD & 3 INT while averaging 366.5 passing yds/g. The top targets for Minshew II and the Cougars have been WR Davontavean Martin (5.5 rec/g; 70.5 yds/g; 2 TD), WR Dezmon Patmon (4.0 rec/g; 61.5 yds/g), WR Jamire Calvin (4.5 rec/g; 59.0 yds/g), and RB James Williams (7.0 rec/g; 43.5 yds/g; 2 TD). RB James Williams has been the main force out of the backfield for the Cougars as he has 118 rushing yards and a TD on 26 carries this season. Defensively, Washington State is holding their opponents to an average of 9.5 ppg on 157.5 total yards per game (83.5 passing yds/g; 74.0 rushing yds/g).

Eastern Washington might be an FCS team, however, they’ve been one of the better FCS teams over the last two decades and with a solid group returning from a 7-4 team last season, the Eagles should be one of the better FCS teams this season. Washington State’s offense seems like it hasn’t skipped a beat as East Carolina transfer, Gardner Minshew, has stepped in nicely to Mike Leach’s “air-raid” offense, however, we really don’t know where the defense stands this season as they have a new defensive coordinator this season and really hasn’t played a team this season that has anything the represents a decent offense. Washington State is a good team however, turnovers have been a problem of the Cougars early in the season and between the fact that Eastern Washington’s offense should put up some points and that the Eagles won’t be intimidated coming into this match-up as they upset Washington State at Martin Stadium just two years ago, I’m initially leaning on taking the Eagles as I imagine they’ll be getting a good amount of points.