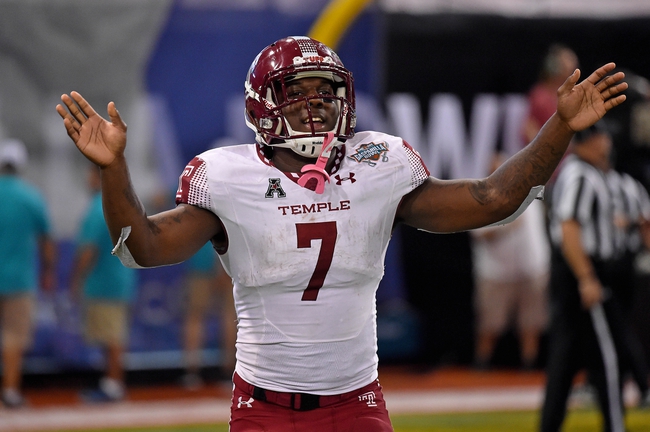 The Temple Owls look for their first home win of the season to get back to a .500 record. The Temple Owls have lost five of their last six home games. Frank Nutile is completing 52.4 percent of his passes for 401 yards, four touchdowns and four interceptions. Nutile and Anthony Russo have combined for five touchdown passes and five interceptions. Branden Mack and Ventell Bryant have combined for 286 receiving yards and two touchdowns while Freddie Johnson has four receptions. The Temple Owls ground game is averaging 108.6 yards per contest, and Ryquell Armstead leads the way with 256 yards on 54 carries. Defensively, Temple is allowing 23 points and 342.3 yards per game. Shaun Bradley leads the Temple Owls with 18 tackles, Michael Dogbe has 3.5 sacks and Sam Franklin has one interception.

The Temple Owls beat Maryland as big underdogs and now all of a sudden are laying a touchdown on a quick turnaround. I'm not sure I buy it. Temple is also 1-5 ATS in its last six games when favored by at least five points. However, the Tulsa Golden Hurricane have been gashed defensively and haven't looked good when playing FBS competition, as their only victory came against Central Arkansas. Temple should be able to control this game in the trenches and did beat Tulsa on the road last year by 21 points. I don't like laying big numbers with Temple due to its grind out it syle of play, but I don't trust Tulsa on the road. I'll take the Owls and the chalk if forced to pick this game.