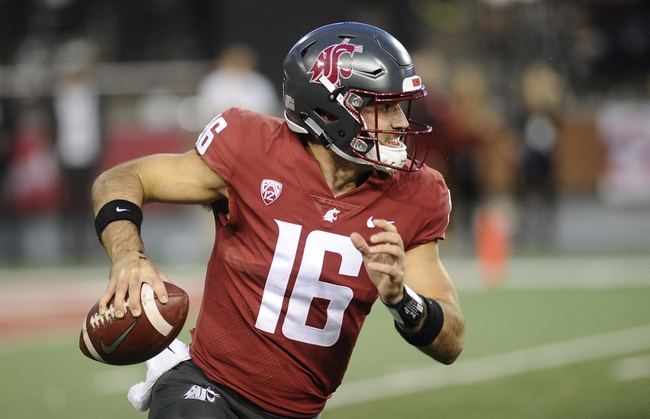 The Washington State Cougars will travel to the Los Angeles Memorial Coliseum to take on the USC Trojans this Friday night in College Football action.

The Washington State Cougars improved to 3-0 (0-0 Pac-12) on the season after easily defeating the FCS Eastern Washington Eagles, 59-24, this past Saturday. Washington State led by just a 35-24 margin heading into the 4th quarter, however, was able to pull away from the Eagles after scoring 24 unanswered points to finish out the game. Washington State outgained Eastern Washington by a 565-372 margin and won the turnover battle by a 4-0 margin. Leading the way for the Cougars was QB Gardner Minshew who completed 45 of 57 passes for 470 yards and 2 TD’s. Offensively, Washington State is averaging 43.7 ppg on 501.0 total yards per game (421.0 passing yds/g; 80.0 rushing yds/g). Leading the way for the Cougars offense has been QB Gardner Minshew who has completed 70.9% of his passes for 8 TD & 3 INT while averaging 401.0 passing yards/g. The main targets for Minshew and the Cougars have been Davontavean Martin (8.0 rec/g; 96.7 yds/g; 3 TD), Jamire Calvin (5.0 rec/g; 62.7 yds/g), Dezmon Patmon (4.3 rec/g; 60.0 yds/g), and Easop Winston Jr. (4.0 rec/g; 23 yds/g; 2 TD). Leading the way for the Washington State backfield has been James Williams who has 4 rushing TD’s while averaging 45.7 rushing yds/g on 10.7 att/g. Williams has also factored into the passing game as he has 2 receiving TD’s on the season while averaging 42.3 receiving yds/g on 6.0 rec/g. Defensively, Washington State is holding their opponents to an average of 14.3 ppg on 231.3 total yards per game (132.7 passing yds/g; 98.7 rushing yds/g).

Washington State will open their Pac-12 season with a tough game on the road, however, even though its been agianst weaker competition, the Cougars passing game looks like it’s not going to miss a beat with the former East Carolina QB, Gardner Minshew at the helm of Mike Leach’s passing attack. USC has had tough back to back weeks with road games at Stanford and Texas and although it’s been a struggle for the Trojans, it’s clear that once their young offense gets on the same page, they’ll be very dangerous. USC should be able to put together a better performance at home however, this is a Washington State team that was able to upset the Trojans last year at home and as I think the passing attack will be able to put up some points on the road, I’m taking the Cougars and the points in this one.