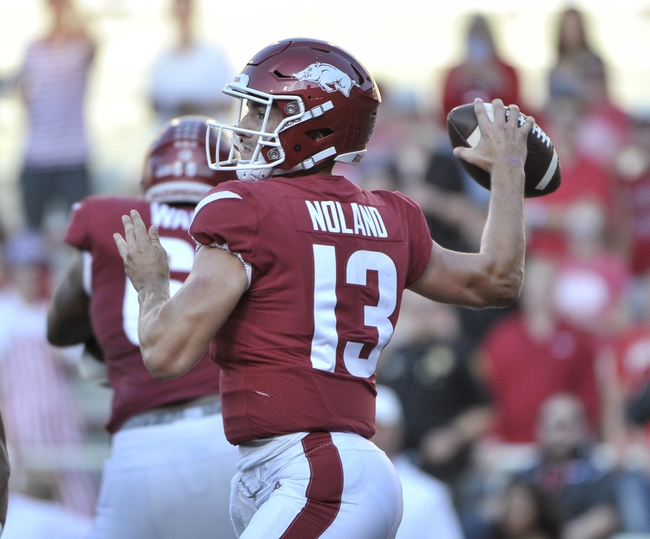 The Arkansas Razorbacks and the Auburn Tigers meet in SEC conference college football action from Jordan-Hare Stadium in week 4 action on Saturday night.

The Arkansas Razorbacks will look to get back to .500 after back-to-back losses, including a 44-17 loss to North Texas last time out to fall to 1-2 this season. Cole Kelley leads the Hogs with 379 passing yards, 3 touchdowns and 4 interceptions, completing 55.4% of his 56 pass attempts this season. Devwah Whaley leads Arkansas on the ground with 205 yards and 2 touchdowns while La’Michael Pettway has racked up a team-high 11 catches for 173 yards and 3 touchdowns this season. Through three games, Arkansas is averaging 402 yards of total offense and 33 points per game while allowing the 14th fewest rushing yards per game with 87.3 per game this season.

The Auburn Tigers will be looking to bounce back from their first loss of the season, coming in a 22-21 loss to LSU in their last outing to drop to 2-1 this season. Jarrett Stidham has completed 64% of his 75 pass attempts for 584 yards, 3 touchdowns and a pair of interceptions while JaTarvious Whitlow has racked up 254 yards rushing on 44 carries with a pair of touchdowns. Ryan Davis leads Auburn with 13 catches for 109 yards while Anthony Schwartz is Auburn’s only other 100-yard receiver this season. Through three games, Auburn is averaging 439 yards of total offense and 35 points per game while allowing the 15th fewest rushing yards per game, giving up 90 yards per game on the ground this season.

I can understand why the line is where it is, as Auburn is the better team and has outscored Arkansas 108-23 in the last two meetings between these two teams in a matchup dominated by the favorite. However, laying just short of four touchdowns is a little bit much for my taste. Sure, Arkansas has suffered a couple losses to North Texas and Colorado State, but both of those teams were very solid offensively. Not to say that Auburn isn’t, but I think that Arkansas can do enough to at least keep this one within four scores, so I’ll take a shot with Arkansas and the load of points in this one.