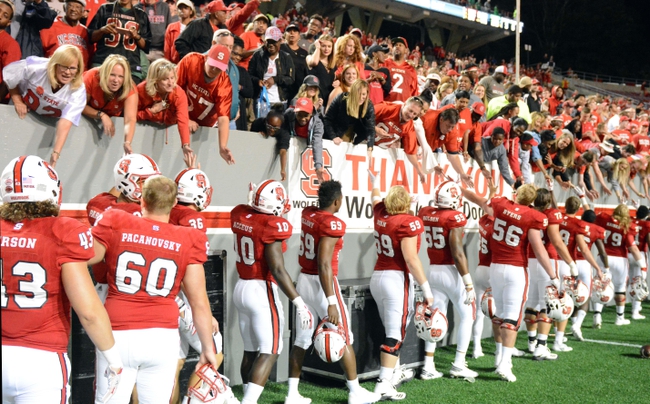 NC State enters this one at 2-0 so far on the young season, following wins over James Madison 24-13 and Georgia State 41-7. The Pack’s matchup against West Virginia was postponed due to the weather.

In the Georgia State game, Wolfpack QB Ryan Finley tossed for 370 yards, two TDs and a pick, while Brady Bodine was the lead rusher on 50 yards and a TD. Kelvin Harmon led the NC State receivers with eight catches for 129 yards.

As for Marshall, they’re sitting at 2-0 as well this season. The Herd have taken victories over Miami (OH) 35-28 and Eastern Kentucky 32-16. Marshall’s game against South Carolina last Saturday was cancelled due to weather.

In the EKY game, Isaiah Green led the Herd on 278 yards, three TDs and one pick, while Willie Johnson’s two carries made him the top rusher on 36 yards. Tyre Brady was the top Marshall receiver with six catches and a TD with 66 yards.

This one opened with a reasonably thin line, but it’s been expanding in the direction of NC State. It’s a little tough to gauge these teams since we’ve only seen them twice and it’s been a while since either of them has been on the field, but I have to agree with the Wolfpack sentiment here; I think it’s their game to control. I’ll go NC State.