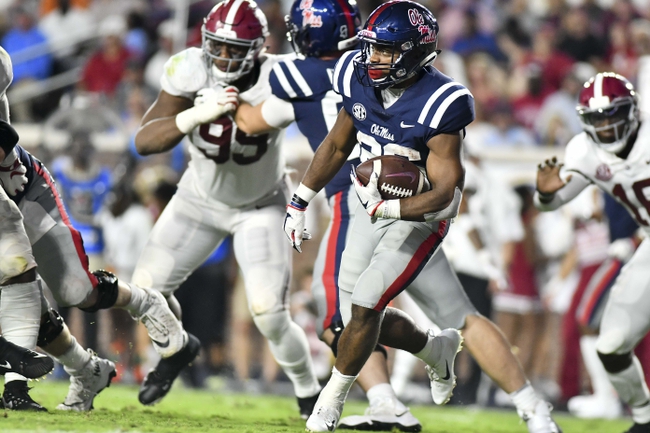 The Kent State Golden Flashes and the Ole Miss Rebels will meet up on the gridiron in week 4 college football action from Vaught-Hemingway Stadium in Oxford, MS on Saturday afternoon.

The Kent State Golden Flashes will look to get back to .500 after falling to 1-2 with a 63-10 blowout loss at the hands of Penn State in their last outing. Woody Barrett threw for 176 yards and a touchdown on 20 of 38 passing, while Dustin Crum led the Flashes with 23 rushing yards. Antwan Dixon led Kent State with 5 catches for 59 yards, while Mike Carrigan came right behind with 58 yards and a touchdown with his 3 grabs. Defensively, Elvis Hines had an interception and KJ Sherald had a sack while Dalton Hicks and Jamal Parker tied for the Kent State lead with 4 tackles in the loss.

The Ole Miss Rebels will look to rebound after their first loss of the season, suffered in humiliating fashion thanks to a 62-7 blowout loss to Alabama after taking a 7-0 lead. Jordan Ta’amu threw for 133 yards, a touchdown and 2 picks on 7 of 22 passing while Scottie Phillips led Ole Miss with 44 rushing yards. D.K. Metcalf led the Rebels with 92 receiving yards, including a 75-yard touchdown to open the scoring for the Rebels while A.J. Brown led Ole Miss with 4 catches. C.J. Moore had an interception and a fumble recovery on defence while Keidron Smith led Ole Miss with 5 tackles in the losing effort.

Anyone who read my stuff last week knows that I was all over Ole Miss to cover against Alabama and boy did that blow up in my face. The Rebels just looked dejected and things just couldn’t get back on track once the train was off the rails. However, one thing everyone can agree on is that the Rebels are heads and shoulders the better team here. The Golden Flashes simply aren’t a good football team, and when they get big numbers, they still fail to cover. This is a game that Ole Miss will use to work out the kinks and win in blowout fashion.