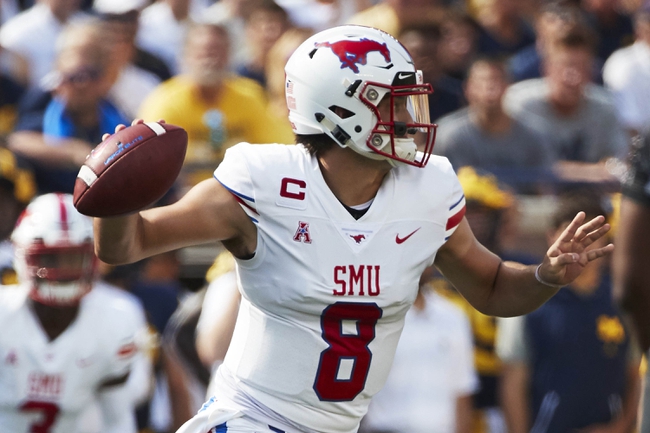 The Navy Midshipmen look for their first road win of the season to put together a three-game winning streak. The Navy Midshipmen have lost each of their last five road games. Garret Lewis is completing 62.5 percent of his passes for 159 yards, zero touchdowns and zero interceptions. Lewis and Malcolm Perry have combined for one touchdown pass and one interception. CJ Williams and Taylor Jackson have combined for 199 receiving yards on 10 receptions while Ryan Mitchell has one reception. The Navy Midshipmen ground game is averaging 358 yards per contest, and Perry leads the way with 497 yards and six touchdowns. Defensively, Navy is allowing 33.7 points and 412 yards per game. Hudson Sullivan leads the Navy Midshipmen with 17 tackles, Taylor Heflin has two sacks and Jarid Ryan has two interceptions.

The SMU Mustangs look for their first victory of the season to prevent their first 0-4 start since the 2014 season. The SMU Mustangs have won six of their last eight home games. Ben Hicks is completing 47.4 percent of his passes for 476 yards, three touchdowns and two interceptions. Hicks has two or more touchdown passes in six of his last 10 games. James Proche and Braeden West have combined for 399 receiving yards and four touchdowns while Reggie Roberson Jr. has six receptions. The SMU Mustangs ground game is averaging 81.6 yards per contest, and West leads the way with 129 yards and two touchdowns. Defensively, SMU is allowing 44.3 points and 450 yards per game. Rodney Clemons leads the SMU Mustangs with 23 tackles, Patrick Nelson has 1.5 sacks and Shaine Hailey has one interception.

The Navy Midshipmen have looked shaky at best despite the 2-1 start and now go on the road where they have lost five straight games. The SMU Mustangs have been downright awful this season and have allowed no less than 38 points in each of their last seven games. SMU also isn't covering games during these losses and is just 3-5 ATS in its last eight games when an underdog of at least three points. Navy has failed to cover its last four games as a favorite of at least three points, but it has had no trobule lighting SMU on fire offensively over the years. I don't want to eat chalk with Navy on the road, but I don't want to back SMU given its defensive issues that carried over from last year. So, give me the Midshipmen based on how past meetings between these clubs have gone.