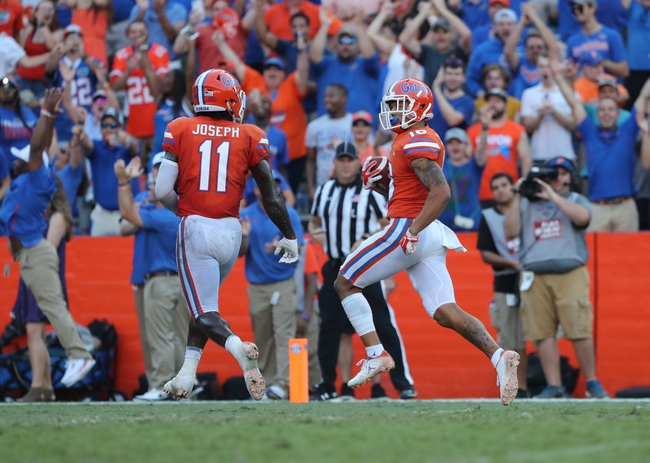 The Florida Gators and the Tennessee Volunteers square off in week 4 SEC Conference college football action from Neyland Stadium on Saturday night.

The Florida Gators will look to build on a 48-10 win over Colorado State that got the Gators back above .500 at 2-1 on the year. Feleipe Franks has completed 53.2% of his 77 pass attempts with 570 yards, 9 touchdowns and 2 interceptions this season while Dameon Pierce leads Florida in rushing with 162 yards and a touchdown. Van Jefferson leads the Gators receivers with 127 yards and 3 touchdowns on a team-high 8 receptions while Freddie Swain also has 100+ yards for the Gators this season. So far through the first three games, the Gators are averaging 381.7 yards of total offense and 39 points per game while allowing just 131.3 passing yards per game, the 8th-fewest in FBS this season.

The Tennessee Volunteers will be looking to build on back-to-back wins to get back above .500 after a 24-0 win over UTEP in their last outing got Tennessee back to 2-1 this season. Jarrett Guarantano has completed 72.2% of his 54 pass attempts for 494 yards and 2 touchdowns while Tim Jordan leads the Vols with 232 yards rushing and is one of three Tennessee players with two rushing touchdowns this season. Marquez Callaway leads the Vols’ receivers with 171 yards and 13 receptions while Josh Palmer is also in the 100-yard club with 148 yards this season. Through their first three games, Tennessee is averaging 409 yards of total offense and 32.3 points per game, while sitting 13th in the country in total yardage against, allowing 291.7 yards per game this season and just 14.3 points per game against.

Florida just beat the heck out of a solid Colorado State squad in their last outing, but this is the Gators’ first road game this season, and while they’ve had success in Knoxville in the past, the Vols have stepped up their defence lately. Sure, UTEP and East Tennessee State aren’t FBS powers, but Florida isn’t deserving of being a road favorite in this spot in my opinion so I’ll take the points with Tennessee as a home dog on Saturday.