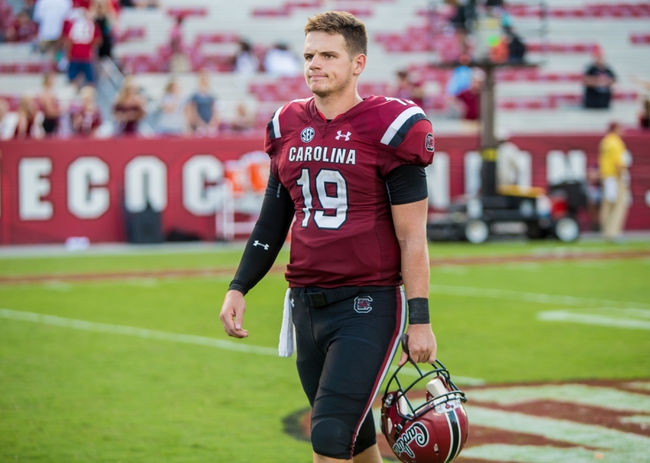 The South Carolina Gamecocks and the Vanderbilt Commodores hook up for some SEC conference college football action from Vanderbilt Stadium in Nashville, TN on Saturday afternoon.

The South Carolina Gamecocks will look to get back on track after having a week to rest up with their matchup against Marshall postponed due to the threat of Hurricane Florence. The Gamecocks currently sit at 1-1 following their week 2 loss to Georgia by a final score of 41-17. Jake Bentley has thrown for 519 yards, 5 touchdowns and 2 interceptions on 68.4% passing this season. Rico Dowdle is South Carolina’s top rusher with 123 yards while Ty’Son Williams has 108 yards on 17 carries through two games. Bryan Edwards leads the Gamecocks with 164 receiving yards and 3 touchdowns while Deebo Samuel has a team-high 13 receptions. Through the first two games, South Carolina is averaging 448.5 yards per game and 33 points per game.

The Vanderbilt Commodores will look to bounce back from their first loss of the season, a 22-17 heartbreaker at the hands of #8 Notre Dame last time out. Kyle Shurmur has completed 64.1% of his 92 pass attempts this season for 754 yards, 5 touchdowns and an interception. Ke’Shawn Vaughn is Vandy’s leading rusher with 184 yards and 3 touchdowns while Jared Pinkney and Kalija Lipscomb are at the top of the Vanderbilt receiving corps. Pinkney has a team-high 241 receiving yards while Lipscomb has caught a Commodores best 25 passes for 234 yards and a team-high 3 touchdowns. Through their first three games, Vanderbilt is averaging 411.7 yards per game and 31 points per contest while sitting 14th in the country defensively, allowing just 13 points per game this season.

Vanderbilt showed a ton of heart and hung around with one of the best in the country in the Irish. However, I still feel that South Carolina is the better team here and the Gamecocks also come in with a huge rest advantage after having last week’s game cancelled. South Carolina has also been solid on the road dating back to last season so I’ll lay the field goal with the Gamecocks on the road.