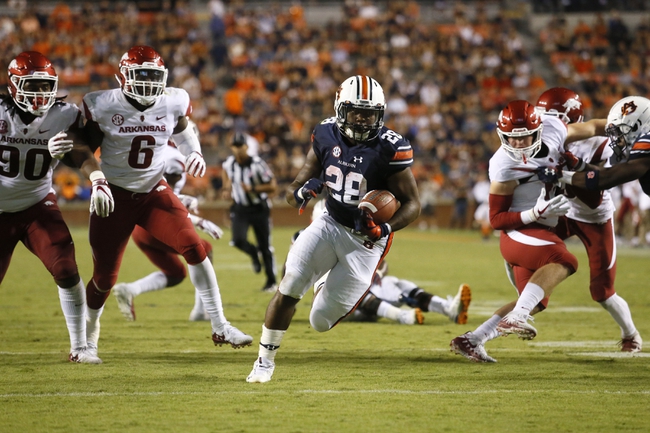 The Southern Miss Golden Eagles and the Auburn Tigers meet in a week 5 college football matchup from Jordan-Hare Stadium in Auburn, Alabama on Saturday afternoon.

The Southern Miss Golden Eagles will look for a massive win to improve on their current 2-1 record after taking down Rice by a final score of 40-22 in their last outing. Jack Abraham has thrown for 1,048 yards and 10 touchdowns in completing 72% of his 107 pass attempts, while Tez Parks leads the Golden Eagles with 107 rushing yards. Quez Watkins leads the Golden Eagles in receiving with 24 catches for 304 yards and 5 touchdowns while Jaylond Adams has 215 receiving yards and a pair of touchdowns. As a team, Southern Miss is averaging 489 yards of total offense to go along with 353.7 passing yards per game which is good for 8th in the FBS and 38.3 points per game. Southern Miss also gets after it defensively, allowing just 271.7 yards of total offense and 139.3 passing yards per game, good for 8th and 5th in the country respectively.

The Auburn Tigers will look for yet another win to remain in the top-10 after improving to 3-1 with a 34-3 pummelling of Arkansas in their last time out. Jarrett Stidham has thrown for 718 yards, 3 touchdowns and 2 interceptions on 63 of 97 passing this season while JaTarvious Whitlow has rushed for 303 yards and 4 touchdowns this season. Anthony Schwartz leads Auburn’s receivers with 163 yards while Ryan Davis has a team-high 19 receptions this season. As a team, Auburn is averaging 385 yards of total offense in addition to 34.8 points per game while allowing the 3rd fewest point per game in the FBS, giving up just 12.5 per game this season.

Auburn should and probably will win this game by a few scores. But something seems off about leaving this many points on the table with a Southern Mis team that can really let it fly. Plus, the Tigers aren’t stellar against the pass, and if you’re backing Auburn, you’re leaving yourself open to the possibility of a backdoor cover if Auburn takes their foot of of the gas. I’m going to take a chance and take the points with Southern Miss.