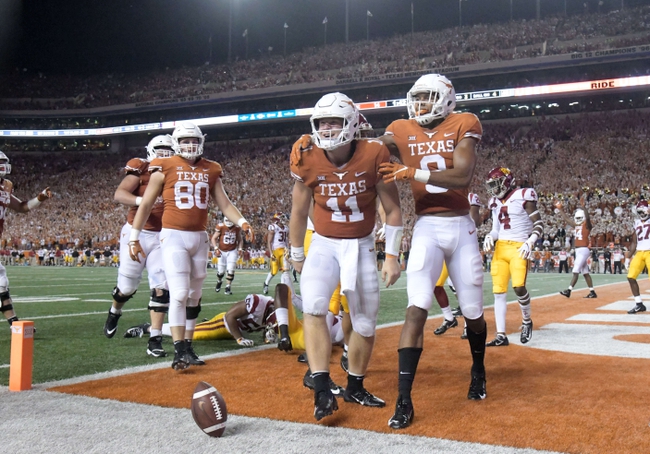 The 18th ranked Texas Longhorns will travel to the Bill Snyder Family Stadium to take on the Kansas State Wildcats this Saturday afternoon in College Football action.

The Kansas State Wildcats fell to 2-2 on the season after being defeated by the 12 ranked West Virginia Mountaineers, 35-6, this past Saturday. Kansas State couldn’t get anything going on the offensive end and had no chance of fighting back after West Virginia 28-3 lead with 9:01 left in the 3rd quarter. Kansas State was outgained by West Virginia by a 464-318 margin however, they did win the turnover battle by a 4-1 margin. Leading the way for the Wildcats was WR Isaiah Zuber who had 133 receiving yards on 10 receptions. On the season, Kansas State is averaging 21.0 ppg on 347.0 total yards per game (191.0 passing yds/g; 156 rushing yds/g). Offensively, Kansas State has been led by QB Skylar Thompson who has completed 59.1% of his passes for 4 YD & 1 INT. Thompson is also the 2nd leading rusher for the Wildcats as he currently has 1 rushing TD and is averaging 44.0 rushing yds/g. Also in the backfield with Thompson has been Alex Barnes who a rushing TD on the season and is averaging 69.3 yds/g on 15.8 att/g. The top receivers for the Wildcats have been Isaiah Zuber (6.0 rec/g; 89.0 yds/g; 3 TD) and Dalton Schoen (2.3 rec/g; 48.5 yds/g). Defensively, Kansas State is allowing their opponents to average 26.8 ppg on 409.0 total yards per game (231.0 passing yds/g; 178.0 rushing yds/g).

After a tough opening season loss to Maryland, Texas has looked like the team we expected this season as they are coming off two signature victories over USC and TCU. Kansas State’s offense looks completely loss at the moment as they barley avoided a major upset to start their season against FCS South Dakota and have scored just a combined 16 points in their two losses agianst Mississippi State and West Virginia. Texas is the better team on both sides of the ball in this one and although the I think the Wildcats will keep this one close initially on their home field, I think Texas slowly pulls away behind a strong defensive effort and wins this one by double digits. Take Texas to cover.